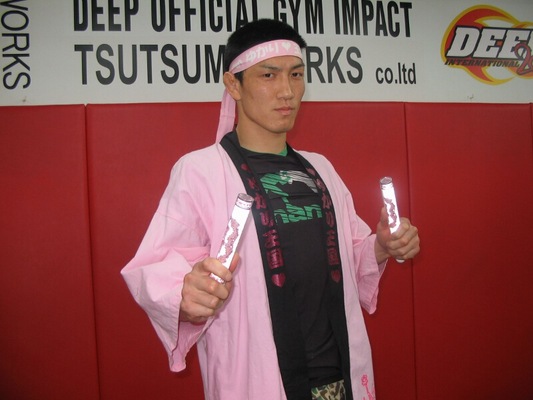 Daiki Hata is a Japanese MMA fighter famously known as “DJ.taiki.” DJ.taiki was born on August 24, 1982 in Saitama, Japan.

DJ.taiki’s main MMA background is wrestling as he wrestled in high school.

Before becoming a professional mixed martial artist, DJ.taiki won the All Japan Amateur Shoot Boxing tournament and he competed in 4 MMA amateurs, losing the first before winning 3 in a row.

DJ.taiki made his professional MMA debut fighting Ryusuke Uemura to a draw on July 25, 2004 in Pancrase. Since his early days as a mixed martial artist, DJ.taiki has always had career of mixed results. That however has never been a major factor to DJ.taiki as he’s almost always in exciting fights that make have made him a fan favorite not only in Japan, but across the world.

Even before his win over Maeda DJ.taiki has declared his official retirement from professional fighting due to amounting injuries and insufficient pay. Following the fight he travelled abroad in order to study at the University of California, San Diego in the United States. He wasn't very happy during his stay, partially because one of the reasons he travelled to America was to better his English and yet the huge majority of the students in his classes were Japanese like him and partially because his room-mate would keep holding parties and distracting him from his studies. A chance meeting with an Otaku acupuncturist gave him an opportunity to treat the slipped disc injury that kept him from fighting and ultimately allowed him return to training, but he still considered himself retired until watching UFC events would lit the fire in him again.

Taiki would move to a school in Las Vegas in order to keep training and hopefully get noticed by the UFC. Unfortunately the amount of time he would spend at the gym would make him miss most of the classes and finally got him removed from the school. With his student VISA terminated he could not remain in the US and finally decided to return to Japan and resume his fighting career. He made a successful return by winning a rematch against Seiji Akao at DEEP 69 Impact on October 26, 2014.

In 2015 his goal of getting noticed by the UFC came true when he was picked to participate in a version of UFC's reality show "The Ultimate Fighter" called "Road to UFC: Japan". On the show he was drafted by Josh Barnett to compete on Team Barnett against Team Nelson coached by Roy Nelson.

Aside from his MMA career, DJ.taiki has also tried his hand in kickboxing, where he's found some success also winning 4 of his 6 fights, 2 of them by knockout..