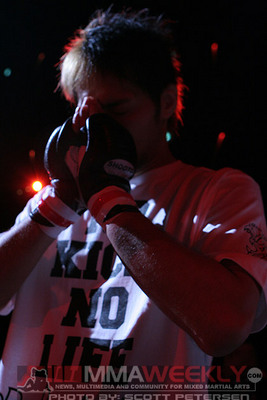 Takeshi Inoue is ineligible for regional rankings due to inactivity.
Fighters must have at least one completed MMA bout in the past two years to be ranked.

Takeshi Inoue is a Japanese MMA fighter born on March 18, 1980 in Yokohama, Japan. Takeshi is mostly known by his MMA name Lion Takeshi. Lion Takeshi trains and fights out of the Shooting Gym Yokohama. His MMA background is in the art of judo in which he has trained in since his junior high school days where he competed in various tournaments through his high school years.

LIon Takeshi began his MMA career competing in amateur Shooto tournaments in 2001 and 2002. He made his pro debut by defeating Hayate Usui by unanimous decision on May 30, 2003.

Inoue is a veteran Lightweight (145) fighter who has fought in Dream and primarily in Shooto. He was the 2004 Shooto Lightweight Tournament Champion and a 2 time Lightweight champion with the organization. On New Year's Eve 2011 Takeshi fought fellow striker Hiroyuki Takaya for the Dream featherweight title but ultimately fell short loosing by unamious decision. He holds notable victories over Caol Uno, Koichiro Matsumoto, Rumina Sato, Alexandre Nogueira, Cole Miller, Antonio Carvalho, and Akitoshi Tamura.