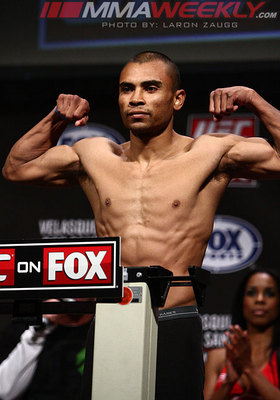 Robbie Peralta is ineligible for regional rankings due to inactivity.
Fighters must have at least one completed MMA bout in the past two years to be ranked.

Robbie Peralta is an American featherweight fighter currently signed to the UFC. He trains out of Team Xplode MMA in Escondido, California. He has previously fought for Gladiator Challenge, where he held the 135 and 145 pound titles and Strikeforce. He holds wins over Darrell Montegue, Hiroyuki Takaya and Jason Young. Of his sixteen wins, fourteen have been finishes including twelve T/KOs. After his loss to Akira Corassani, he was suspended for six months due to a failed drug test from marijuana.

A young and exciting featherweight, Robbie 'Problems' Peralta began his career in 2007. He would lose his first fight by submission, but would fight throughout Central American and California, amassing a 5-2 record in his first ten months. In early 2008, he would begin fighting for Gladiator Challenge in California. He would go 8-1 with the promotion through three years and picked up belts in the featherweight and bantamweight divisions. He was picked up by Strikeforce in 2011 and gained notoriety when he shocked hardcore fans by winning a split decision at Strikeforce: Diaz vs. Daley over DREAM featherweight champion, Hiroyuki Takaya. He possessed a 13-3 record to that point, with all of his wins by finish before the Takaya bout.

After defeating Takaya, the Californian would get signed to the UFC and made his debut against Mike Lullo at UFC Fight Night 25 as a late replacement and won a unanimous decision. This extended his winning streak to eight. He would then take on WEC veteran, Mackens Semerzier at UFC on Fox 1. In the third round, he would clash heads with the grappling specialist, which ended up stunning Semerzier. Peralta would go on to finish Semerzier and was initially awarded a TKO victory, but replays later indicated that the two fighters clashed heads, leading to the finish. The California State Athletic Commission would change the fight result to a no contest.

Peralta was briefly linked to a fight with Charles Oliveira but would later be moved to a rematch with Smerzier at UFC of FX 2 but was forced out of the fight with a toe injury. He would eventually return after a ten month layoff and picked up a big win over British striker, Jason Young, only needin 23 seconds to pick up the win by knockout. Peralta would drop his next fight, losing a decision to Akira Corassani. This snapped his three and a half year, ten fight undefeated streak. After the bout, it was revealed that Peralta had tested positive for marijuana and was suspended for six months. He has also agreed to attend a drug rehab and be tested again before he is allowed back in the UFC.

Robbie is expected to take on Estevan Payan in the opening fight of UFC 168. After a close, back and forth fight, he would would pick up a TKO twelve seconds into the third round.