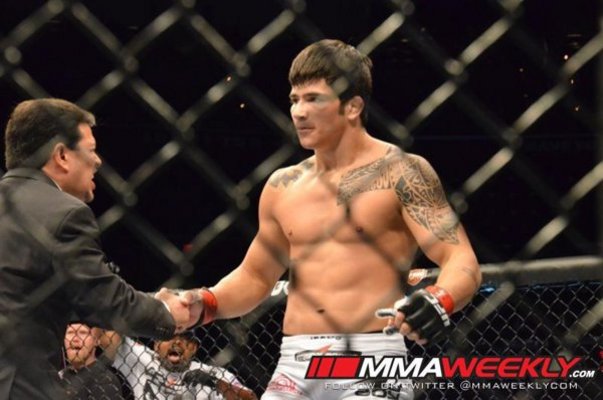 Erick Silva is ineligible for regional rankings due to inactivity.
Fighters must have at least one completed MMA bout in the past two years to be ranked.

Erick Silva is a Brazillian welterweight fighter currently signed to the UFC. He is a black belt in Brazilian Jiu Jitsu and a black belt in Judo. He trains at Team Nogueira in Vila Velha, Espirita Santo, Brazil. As a teenager, he dreamed of being a footballer, but influenced by the likes of Royce Gracie, he started in jiu-jitsu and never stopped. He has previously fought for Jungle Fight and holds notable wins over Luis Ramos, Charlie Brenneman, Jason High, and Takenori Sato. Although his strength is on the ground, he also has an overwhelming stand up style. Of his sixteen wins, thirteen have been finishes including nine T/KOs. He has won "Performance of the Night" one time, "Fight of the Night" one time, and "Submission of the Night" two times.

The majority of Silva's career was spent in Brazil. After compiling a 5-1 record, he joined one of the premiere Brazilian promotions, Jungle fight. In his time there, he went 7-0 1 NC over a two and a half year time and he was able to earn the promotions first welterweight title.

Silva made his UFC deubt against Luis Ramos at UFC 134 in Brazil. In an impressive display of power, he was able to get a knockout in 40 seconds. He next fought Carlo Prater, again in Brazil. Although the fight appeared to be another under-one-minute knockout for Silva, referee Mario Yamasaki awarded the win to Prader by disqualification due to illegal strikes to the back of the head. It was a very controversial call but was ultimately upheld, handing Silva his first defeat in over five years.

Erick rebounded in his US debut against Charlie Brenneman where he was able to pick up a first round submission via rear naked choke. He again fought in Brazil at UFC 153 against grappling ace, Jon Fitch. Although Silva would lose a unanimous decision, the fight was highly competitive and earned Fight of the Night honors. He was again able to rebound from a loss when he defeated Jason High in another first round submission. The reverse triangle choke armbar combination that he used to finish High would again earn him Submission of the Night, making three fights in a row that he was awarded a bonus.

Silva next took on Dong Hyun Kim at UFC Fight Night 29 in Brazil. Although he was winning much of the standup, he was knocked out in the second round. He was set to take on Nate Loughran at UFC Fight Night 36 but an injury forced his opponent off of the card. He instead fought seven time King of Pancrase, Takenori Sato and was able to quickly finish his opponent by TKO in the first minute of the fight. He was awarded the new "Performance of the Night" bonus for his efforts.

Silva was then slated to face Matt Brown next at UFC Fight Night 40. Despite hurting Brown severely very early, Silva would go on to lose via TKO in the 3rd round in a wild "fight of the year" candidate type of fight. Naturally, Silva and Brown were awarded the "Fight of the Night" bonus.

Desperately needing a win to stay among the upper echelon of the welterweight division, the UFC would pair Silva with Mike Rhodes at UFC Fight Night 58. It would take Silva a little over a minute to secure and arm-triangle choke victory. His efforts would once again earn him a "Performance of the Night" bonus.