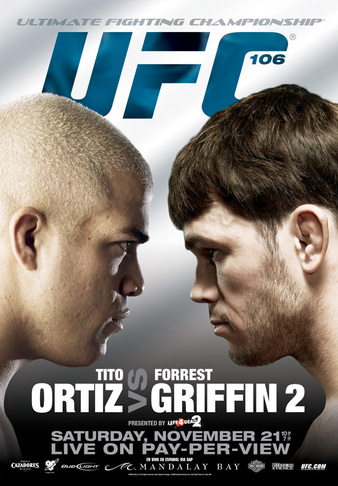 Tapology members can make predictions for upcoming MMA & Boxing fights. UFC 106 is closed for new predictions. 14 total members made predictions on this event, breaking down as follows below.

Leaderboard of the best predictions by member: UFC 106 Leaderboard

Though it was moderately successful Pay Per View terms, drawing approximately 375,000 buys, UFC 106 marked the beginning of the worst rash of bad luck due to fighter unavailability the UFC has ever experienced. Originally, Heavyweight Champion Brock Lesnar was set to defend his title against Shane Carwin, but a frighteningly dangerous battle with diverticulitis sidelined the champion until midway into 2010. In response, the UFC promoted a rematch between Tito Ortiz and Forrest Griffin to the main event. In a reversal of their first bout from 2006, Griffin won a Split Decision over Ortiz.

The rash of injuries would continue for the next several months, resulting in some of the most dismal Pay Per View buy rates—with the exception of UFC 107—in modern UFC history.

Watch this video HL for the UFC 106 Forrest Griffin vs. Tito Ortiz rematch.