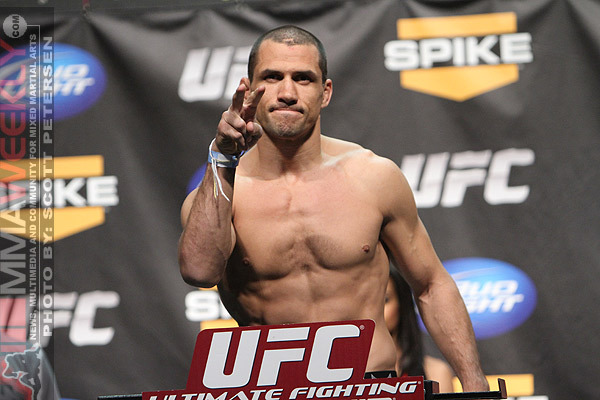 Aaron Simpson is ineligible for regional rankings due to inactivity.
Fighters must have at least one completed MMA bout in the past two years to be ranked.

An NCAA Division I All-American for Arizona State University in 1996 and 1998, Aaron Simpson did not begin competing in mixed martial arts until 2007, at 33 years young.  Once he made the transition, however, it quickly became apparent that he was one of the most talented prospects to enter the sport in years.

Simpson reeled off seven straight victories, defeating the likes of Ed Herman and Tom Lawlor in back-to-back stints with the WEC and UFC. In June 2010, Simpson's undefeated run came to a close courtesy of a rejuvenated Chris Leben, who knocked Simpson out in the second round at the TUF 11 Finale.  He would lose two in a row, before bouncing back with three consecutive wins.

This streak would come to end in his next fight, as he lost to Ronny Markes via split decision.  The loss made A-Train re-evaluate his career and he ultimately decided to drop down to Welterweight, to compete with fighters more his own size.  Simpson's welterweight debut was a successful one, as he won a decision over Kenny Robertson.

While his wrestling is undoubtedly his strong suit, Simpson has shown a natural ability to finish his opponents with strikes, having knocked out the majority of his victims.  Now being one of the bigger guys in his division instead of one of the smaller guys, Simpson is looking forward to a successful career in his new weight class.

Following a 2nd round knockout loss to Mike Pierce at UFC on FX: Browne vs Silva he would be cut from the UFC. Shortly after being cut it was announced that he was the newest fighter on the growing World Series of Fighting roster. He is set to face Josh Burkman at WSOF 2 on March 23rd, 2013.