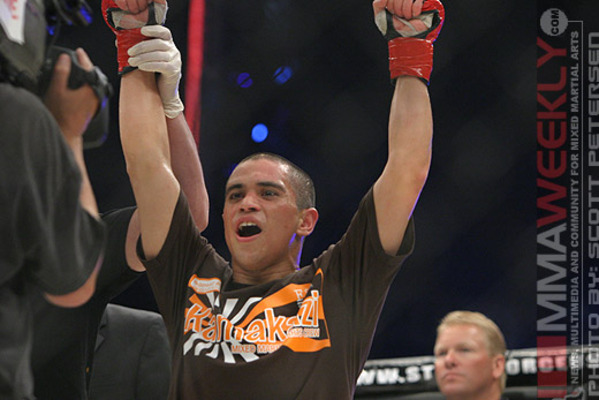 Chris Cariaso is ineligible for regional rankings due to inactivity.
Fighters must have at least one completed MMA bout in the past two years to be ranked.

Chris Cariaso is a veteran of Strikeforce, WEC, and the UFC. He currently competes in the flyweight division of the UFC. Ten of his fourteen wins have come by decision. Two of his five loses have been to current UFC Interim Bantamweight champ, Renan Barao, and the one time challenger for that belt, Michael McDonald.


Chris made his WEC debut against Rafael Rebello which he won by decision. His only other fight in the WEC would be against Renan Barao at the promotions final event. Cariaso would lose that fight by submission in the first round.

Cariaso was then moved to the UFC along with many other former WEC fighters. He would make his promotional debut against Will Campuzano. The fight ended in a unanimous decision win for Cariaso. He would next take on Michael McDonald at UFC 130. Although Cariaso lost the fight, it was by split decision. This marked only the second time that McDonald was unable to finish his opponent and the first time he had won a split decision.

Cariaso would bounce back with decision wins over Vaughn Lee and Takeya Mizugaki. He then decided to drop to Flyweight. His debut at his new weight was against TUF alumni, Josh Ferguson. He would go on to win another decision victory. Chris next faced off against John Moraga at UFC 155. In a back and forth fight, Cariaso would submit to a guillotine choke, snapping a three fight win streak. He would again drop a decision when he lost to Jussier Formiga in May, 2013, marking the first time he had lost consecutive fights in his career.

Chris was hoping to get back to his winning ways when he took on Brazilian, Iliarde Santos at UFC Fight Night 29. He was able to bounce back with a TKO victory at the end of the second round. He was supposed to take on Kyoji Horiguchi at UFC 169 but the bout was cancelled due to a injury to Horiguchi. So Cariaso instead will be facing Louis Smolka at UFC Fight Night 35.