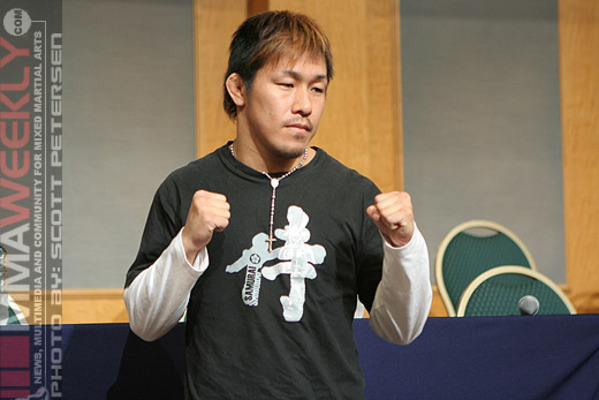 Shoji Maruyama commonly known as just Shoji is a Japanese MMA fighter born on April 24, 1983 in Nabari, Mie, Japan. Shoji is the first person to ever hold the King of Pancrase lightweight title.

Shoji’s childhood dream was to become a professional baseball player. He played for his high schools baseball team, but once he graduated, he wasn’t drafted to play on any big, recognizable baseball teams, so he decided to try his luck in another territory and he signed up with the Air Force and was enlisted. At the same time he was enlisted in the Air Force, he began training mixed martial arts at the Japan Chute Boxe Academy with Sergio Cunha. When Cunha left Chute Boxe, Shoji also left and joined his current team, KIBA Martial Arts Club.

Shoji began his MMA career fighting in Pancrase. For the early part of his career, Shoji was a mainstay there and he even captured the King of Pancrase lightweight title becoming the first titleholder. In his time in Pancrase, Shoji fought Brazilian featherweight UFC star, José Aldo in a fight which he lost by unanimous decision to Aldo.

In July 2008, Shoji decided to vacate the King of Pancrase lightweight title and drop down to featherweight.

Shoji then made his featherweight debut fighting Takafumi Otsuka in his DEEP debut losing the fight by decision to Otsuka. Shoji then turned into a fan favorite mainstay in DEEP.

Shoji’s DEEP run has had mixed results, but his popularity earned him a DEEP featherweight title shot against the DEEP featherweight kingpin and one of the fighters who had already beaten previously at DEEP 54 IMPACT, Kazunori Yokota. Shoji received his shot at the title at DEEP 61 IMPACT, but he came up on the short end losing to Yokota in an exciting fight that saw the fans clearly favoring Shoji. Yokota however used his wrestling and grappling skills to ground Shoji and grind out a unanimous decision win.

Despite his mixed set of results, Shoji is still a fan favorite among MMA fans in Japan and is always cheered on no matter what the outcome result is.