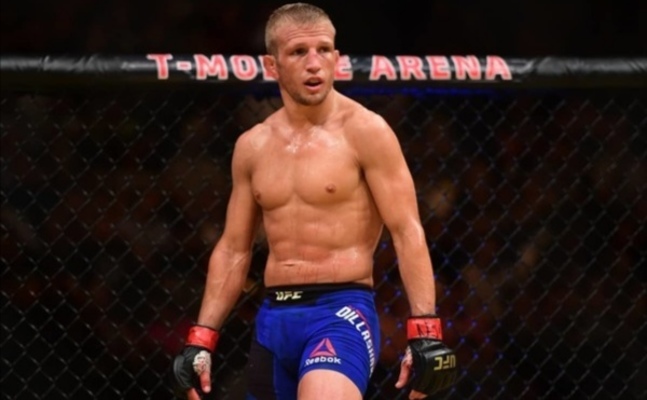 Fighting for a major organization has made T.J. Dillashaw ineligible for regional rankings.

T.J. Dillashaw is a wrestler fighting out of Team Alpha Male in Sacremento, California. He ended his high school career with a record of 170-33 and went on to wrestle for Cal State Fullerton where he was ranked 10th in the nation at 133 lbs in his senior year. He earned a Bachelor's degree in Kinesiology. He has finished six of his nine fights with equal numbers of submissions and knockouts. He has earned the "Fight of the Night" bonus one time.

Dillashaw was invited to join Team Alpha Male by Urijah Faber to start his MMA training. He went 2-0 as an amateur before making his pro debut. He fought fellow debuter, Czar Sklovas in King of the Cage and was able to pick up a unanimous decision win. Dillashaw would win 3 more fights, finishing all of his opponents to bring his record to 4-0 when he tried out for The Ultimate Fighter.

Dillashaw defeated Matt Jaggers by a first round TKO to gain entry into The Ultimate Fighter house and was picked to join Team Bisping as the third overall bantamweight pick. He would then defeat Roland Delorme by rear naked choke in the preliminary round to move on to the semi finals. In the semi final fight, he would face off against Dustin Pague who was also a wrestler. TJ would grind out a dominating unanimous decision (30-26, 30-27, 30-26) victory to secure a spot in the final. He would make his UFC debut at The Ultimate Fighter 14 Finale facing off against John Dodson. He would lose in the first round by TKO handing Dillashaw his first loss in MMA.

Dillashaw bounced back with a Unanimous Decision victory over Walel Watson and a first round submission over Vaughan Lee. Dillashaw would continue this win streak with a nice finish by TKO in the 2nd round against Issei Tamura at UFC 158. TJ would then face off against TUF Brazil alum and undefeated fighter Hugo Viana at UFX on Fox 7. His win streak would continue with another impressive TKO finish in the first round. He next fought fellow top 10 bantamweight, Raphael Assuncao, at UFC Fight Night 29. In a very exciting and very close fight, Dillashaw would lose a spilt decision. He did however, become the first person take Assuncao down in a pro fight. Their fight would earn both fighters Fight of the Night honors. He took on Mike Easton at UFC Fight Night 35 and was able to win a convincing unanimous decision.

On 24 May, 2014 at UFC 173, Dillashaw made one of the biggest upsets in UFC's history and easily the biggest upset in the Bantam Weight Division, when he took on Renan Barao and beating him in a spectacular fashion, by TKO in Round 5 at 2:22. Dillashaw used his hands to dictate the fight from start to finish, snapping Barao's 22 fight winning streak and 34 fight unbeaten streak. The last time Barao was defeated was back in his pro debut in 14 April, 2005. Dillashaw stuck to his game plan of using lateral movement to drop kicks and punches to Barao, who did not utilize his kicks, most likely to avoid Dillashaw's takedowns. Dillashaw finished the fight with a punch, a kick, and another quick punch to drop the tired Champion on his back. Dillashaw immediately took advantage of this and landed several hard shots on the ground until Referee Herb Dean stopped the fight. This fight was also Dillashaw's second time winning the Fight of the Night bonus and the first time winning Performance of the Night.

Dillashaw was scheduled to rematch Barao at UFC 177 however the day before the event Barao would pull out of the fight because of weight cutting issues. However Joe Soto would step in to save the title fight for the card. Soto put forth a good effort but Dillashaw was able to defend his belt for the first time with a performance of the night TKO in the fight round.

Episode 7 Dillashaw def. Roland Delorme by Rear Naked Choke at 1:43 of Round 2

The Ultimate Fighter 14 Finale John Dodson def. Dillashaw by TKO (Punches) at 1:54 of Round 1

In Two fights, Dillashaw faced his former Alpha Male teammate Cody "No Love" Garbrandt. In the first fight, Garbrandt (the champion at the time) rocked TJ  at the end of the first round almost knocking his former teammate out.

TJ was visibly wobbly when walking back to his corner. TJ however recovered and came out strong in round 2, knocking out the Champion.

In the next fight with Garbrandt, TJ won the one sided fight in decisive fashion by KO in round 1. Big drama proceeded both fights, as TJ left team alpha male to train and coach at the gym of Duane "Bang" Ludwig in Colorado

On Saturday, January 19, 2019 the UFC held it's fourth ever champion vs champion fight between Bantamweight champ TJ Dillashaw and Flyweight champion Henry Cejudo. The much anticipated fight was over in 32 secounds, with Cejudo winning by TKO.

In a stunning turn of events, TJ Dillashaw tested positive for EPO in a test conducted by USADA.

Dillashaw did not contest the test results and has been suspended for two years.  He is eligible to return after January 19, 2021.