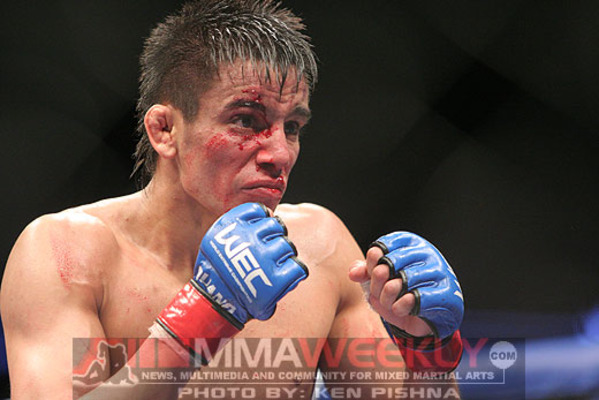 Miguel Torres is ineligible for regional rankings due to inactivity.
Fighters must have at least one completed MMA bout in the past two years to be ranked.

Miguel Angel Torres was one of World Extreme Cagefighting’s first major stars. He held the WEC Bantamweight Championship belt during all of 2008 and much of 2009, when he reeled off a string of dominating wins against 135 lb. title challengers. At his peak during that time, Torres cracked most MMA pound-for-pound top ten lists, and some top five lists.

A BJJ black belt under the legendary Carlson Gracie Jr., Torres is considered one of the most well-rounded MMA athletes fighting today, combining crisp boxing with an extremely agile and dangerous ground attack, particularly from his guard. Torres is one of the few mixed martial artists active today who is comfortable not only pulling guard, but attacking standing opponents from his guard using a combination of aggressive upkicks and butt-scoots. Torres is equally well-known for his extraordinary, indeed legendary, stamina and capacity for long-duration training, including routine sessions purportedly involving many hundreds of push-ups and sit-ups.

Before entering the WEC, Torres had compiled a record of 32-1, cementing him as one of the premier fighters at 135 lb. After making his WEC debut in a submission victory over Jeff Bedard, Torres took the WEC Bantamweight Title from Chase Beebe at WEC 32 via submission. Torres went on to reel off 3 consecutive title defenses, including 2 TKOs over Yoshiro Maeda and Manny Tapia and a Fight of the Night winning performance in a brutal bout with Takeya Mizugaki, which was also on many lists for one of the best bouts of 2009.

Torres' reign of dominance over the 135 lb. division came to an end in August of 2009 when Brian Bowles knocked him out at WEC 42, marking only the second defeat of Torres' career. Torres would suffer his second loss in consecutive outings and third overall when he fought Joseph Benavidez at WEC 47. Torres would get back to his winning ways with a Submission of the Night performance against Charlie Valencia at WEC 51.

After the WEC's merger with the UFC, Torres made his successful promotional debut at UFC 126 against Antonio Banuelos. Torres then lost a highly controversial decision in which he was constantly attacking from his back against Demetrious Johnson UFC 130. Torres defeated Nick Pace in what many considered one of Torres' least exciting fights after Pace came in 5 pounds over the weight limit at UFC 139.

A month after Torres' victory over Pace it was announced that the longtime Bantamweight star had been released from the UFC due to an egregious tweet that was quoting a TV show. After Torres visited several rape crises centers and made amends, Torres was allowed to continue fighting in the promotion.

In April 2012, at UFC 145, Torres took on highly touted prospect Michael McDonald and lost via Knockout. He was subsequently released from the UFC. On September 6, 2012, it was announced that Torres had signed to fight for World Series of Fighting. On November 3, 2012, Miguel fought Marlon Moraes on the main card of the World Series of Fighting's promotional debut. He lost the fight via split decision.

Torres lives and trains out of the greater Chicago, Illinois area and runs a martial arts academy based in Hammond, Indiana. After losing his title, Torres realized that training himself was probably a thing of the past and has since been training part time in a variety of camps including Tri-Star and the Blackzilians. In recent years one of Torres' defining features has been his mullet.