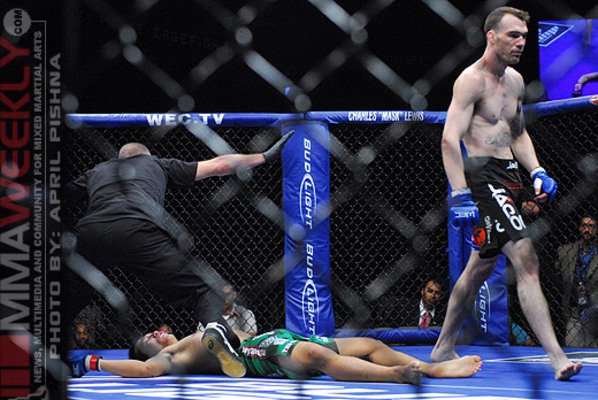 George Roop is ineligible for regional rankings due to inactivity.
Fighters must have at least one completed MMA bout in the past two years to be ranked.

George Roop is an American bantamweight fighter currently signed to the UFC. He trains out of APEX MMA in Tuscon, Arizona. He has fought for promotions such as Rage in the Cage and the WEC and he was a cast member on the eighth installment of The Ultimate Fighter. He holds notable wins over Chan Sung-Jung, John Grispi and Brian Bowles. He earned the "Fight of the Night" and "Knockout of the Night" bonuses one time each in the WEC. Of his fourteen wins, eight have been finishes with equal numbers of submissions and T/KOs.

Roop began his career fighting primarily in Arizona for the Rage in the Cage promotion. After compiling an 8-3 record in his first two years, he earned a spot on The Ultimate Fighter Season 8. He would defeat Rolando Delgado by decision to earn a spot in the house. Despite being the last fighter picked in the team selections and breaking his hand, he was able to win his next fight in the house, defeating John Polakowski by decision. His run would end when he was submitted by season finalist, Phillipe Nover.

After his time in the Ultimate Fighter house was over, George was given a shot in the UFC. His first fight was against cast mate Shane Nelson on the shows finale card. Roop would come up short, losing a split decision. He was given another chance, however, and was able to win a split decision over Dave Kaplan at UFC 98. He would step in as a late replacement against George Sotropoulos at UFC 101 but was submitted with a kimura in the second round and released from the promotion.

Roop would bounce back by getting a featherweight title shot in Rage in the Cage upon his release. He would win the title fight by decision and was quickly signed by the WEC. He would drop to bantamweight after having previously fought at lightweight and featherweight for most of his career. His first fight would be against veteran Eddie Wineland. He would lose a unanimous decision but would return three months later to take on Leonard Garcia, a fight that would end in a rare split draw but would earn both fighters the "Fight of the Night" bonus. George would again face stiff competition when he faced Chan Sung-Jung and handed the Korean his first stoppage loss with a brutal head kick knockout in the second round.

When the WEC ceased operations in early 2011, Roop was brought over to the UFC in the featherweight division. In his first year with the company, he would limp to a 1-3 record with losses to former training partner Mark Hominick, Hatsu Hioki, and Cub Swanson and a T/KO win over Josh Grispi. A series of injuries would put him on the shelf for fourteen months, but he would return in March 2013 in the bantamweight division. His first fight at 135 against Reuben Duran was a must win as he was on a two fight losing streak. George would come through with a decision win. He was thrown in the mix just two months later against preferential contender, Brian Bowles, and was able to finish his opponent in the second round via T/KO. He fought Francisco Rivera at UFC: Fight for the Troops 3 but would fall to a TKO in the second round.