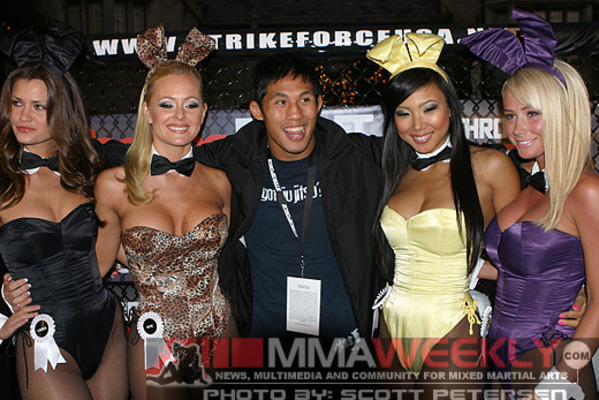 Nam Phan is ineligible for regional rankings due to inactivity.
Fighters must have at least one completed MMA bout in the past two years to be ranked.

Nam Phan is a Vietnamese-American bantamweight fighter currently signed to the UFC. He is a black belt in Brazilian Jiu Jitsu, Karate and Judo as well as a second degree black belt in Quyen Dao. He trains out of Team Alpha Male in Sacremento, California and also owns his own gym named Ma Du Academy. Nam has fought for numerous promotions such as the WEC, KOTC, Strikeforce, Dynamite! USA, Sengoku and Tachi Palace Fights and was a cat member of The Ultimate Fighter 12. He holds notable victories over Saad Awad, Leonard Garcia and Cole Miller. He has won "Fight of the Night" honors two times. Of his eighteen career wins, twelve have been finishes including seven T/KOs.

Nam began training martial arts at eight years old under Grandmaster Ha Quoc Huy. He trained Quyen Dao (a Vietnamese martial art) for nine ears and earned his black belt at age 17. In 2000, Nam started Brazilian Jiu Jitsu under Carlson Gracie Black Belt Franco De Camargo. He studied for 5 years with Sensei Franco before moving on to train with Marciol Feitosa at Gracie Barra. Over time, Nam began to slowly move away from gi jiu jitsu and in 2005, solely devoted his training to no gi jiu jitsu training. At this time, Nam met friend, mentor and coach Jeremy Williams, where he trained full time at Apex Jiu Jitsu; until his tragic death in May 2007. Nam continues to train no gi jiu jitsu at Ma Du Academy, as well as Subfighter Gym with Rick Estrada, Russ Muira, and Adam Lynn inLaguna Hills, CA.

To become more versatile, Nam began boxing as well. He started in 2004 and his amateur record is 5-3. He became a professional boxer in 2006 and currently holds a pro record of 3-1. He trains under Art James of Team PunchOut of Anaheim, CA. Nam’s well rounded MMA skills also include a wrestling component. He began in his early high school days when he was on the Rancho Alamito wrestling team in Garden Grove, CA. He was a league champion and CIF finalist. Nam also wrestled for Golden West College in 2002. In addition to BJJ, boxing, and wrestling, Nam also trains Muay Thai kickboxing under Master Fumi Fujimoto.

Phan began his professional career in 2001. He was able to win his first two fights, both with second round finishes. in 2003, with a 2-0 record, he would enter an eight man, one night tournament. He would win his first two fights with decisions but would suffer his first loss when he lost a decision to future WEC lightweight champion, Rob McCullough. He would fight sporadically until he signed with KOTC in 2005. With the promotion, he would go 6-0 in a six month time span including a twelve second armbar victory. He would earn one more victory outside of KOTC after a thirteen month layoff to notch his winning streak to seven before joining Strikeforce in 2006. He would get an immediate title shot against then champion, Josh Thomson, at Strikeforce 4 but would lose by unanimous decision.

Nam would be finished for the first time in his next fight when he lost by TKO in just twenty six seconds to Gesias Cavalcante at Dynamite! USA. He would earn TKO wins over Shad Smith and Saad Awad, but would lose by split decision to Billy Evangelista in his return to Strikeforce. He would enter Sengoku's featherweight grand prix in 2009. He would win his first fight by by TKO but would lose his second round fight the same way. In early 2010, Phan would be given a title shot in Tachi Palace Fights, but would be knocked out in the first round. He would pick up one more submission win two months later to improve his record to 16-7.

In 2010, it was announced that Phan was selected to be on The Ultimate Fighter 12. In the elimination fight to get into the house, he would finish Mike Budnik with a liver strike. He was selected as the fifth overall pick for Team Koscheck. Nam would pick up another win when he defeated Spencer Paige by decision. He was pitted against guillotine specialist, Cody McKenzie, in the quarter finals and was able to knock him out in the second round. In his semifinal fight, he would lose a split decision to Michael Johnson and be eliminated from the tournament.

Nam was expected to fight fellow cast member, Alex Caceres, at the finale, but an injury forced Caceres out of the fight. He was replaced by Leonard Garcia. In a "Fight of the Night" performance, Phan would end up losing a highly controversial decision. It was named the "Robbery of the Year" by many MMA news outlets. Although he lost, he was still awarded his win bonus for the fight since the decision was so controversial. He was expected to rematch Garcia in March 2011, bu an injury forced Phan off the card. He would instead next fight Mike Brown at UFC 133 but would again lose a decision. He stepped in as a late replacement against Matt Grice, but when an injury forced Grice off of the card too, Nam instead got a rematch with Leonard Garcia on the same card. Although the fight again went to the judges, Nam was victorious this time and both fighters again picked up "Fight of the Night" bonuses.

Phan would take on Jimy Hettes at UFC 141, but would be outgrappled in a rout and would lose the unanimous decision. He would bounce back with a split decision win over Cole Miller, but would lose badly when he faced German striker, Dennis Siver, at UFC on Fox 5. He would receive only the second 30-24 scorecard in UFC history in his unanimous decision loss. He next fought Takeya Mizugaki at UFC Fight Night 33. He was controlled for much of the fight, but was able to mount a small comeback at the end of the third round. He would end up losing a unanimous decision.

Phan was again defeated via unanimous decision to Vaughan Lee, at The Ultimate Fighter China Finale: Kim vs Hathaway. This was his sixth loss in his eight fight career with the UFC and sent his record to 2-8 in his last ten fights. He was released from the UFC after this loss.

Phan went back to Japan where he broke his 3 fight losing streak win two dominate victories, including a first round submission at Pancrase 261, against Yuki Baba.

On 15 November, 2014, Phan came back to North America to face Mike Richman, at Bellator 131. Phan was quickly finished by Richman, being TKO'd 46 seconds into the fight.

However, this lost did not faze the promoters at Pancrase, as they have just announced Phan will be fighting for the vacant Featherweight title on 1 February, 2015, at Pancrase 264, against longtime Japanese MMA veteran Takumi Nakayama.