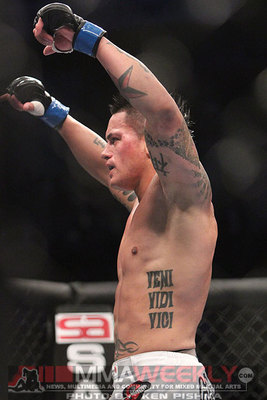 Reuben Duran is ineligible for regional rankings due to inactivity.
Fighters must have at least one completed MMA bout in the past two years to be ranked.

Reuben Duran was born on 2 July, 1983, in Chula Vista, California, USA. Duran began training in martial arts at an early age when he started karate at age 7. He would continue learning more martial arts as he got older, including boxing, BJJ and Muay Thai. While he may focus on striking during most of his fights he is a well rounded fighter.

Duran began his professional career at 23. He quickly made a name for himself when he went 7-2-1 in his first 10 fights, including 5 first round finishes. His performances caught the attention of the UFC, who signed him in early 2011. He made his UFC debut against Takeya Mizugaki, at UFC on Versus 3.  He replaced an injured Franciso Rivera. In a close bout Curan lost via split decision.

Duran then faced Rivera, who he replaced in his previous fight, at The Ultimate Fighter 13 Finale. He earned himself Submission of the Night bonus with a RNC in Round 3.

In his next fight against Hugo Viana, at The Ultimate Fighter 16 Finale. Duran was quickly knocked down twice by Viana, then finally finished via KO later on in Round 1.

Duran was step into the octagon one last time when he faced George Roon at UFC 158. In a sub-par performance, Duran lost via UD and was released from the UFC.

Duran has since returned to the promotion where he spent most of his early career at - KOTC. In his two fights since the UFC, Duran has gone 2-0, with a TKO victory over Tony Sanchez at KOTC: Slugfest and then winning the KOTC flyweigh interm belt when he defeated Eduardo Torres via UD.