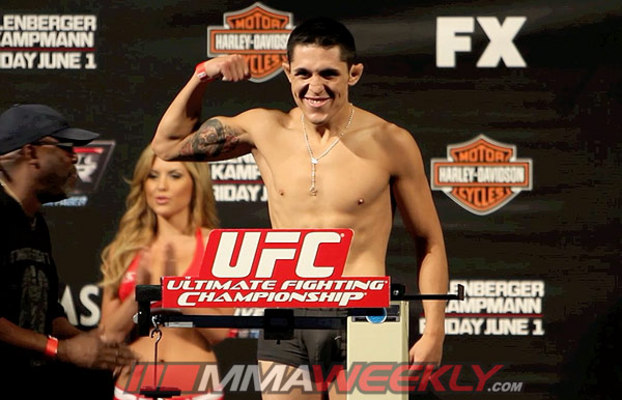 Fighting for a major organization has made Erik Perez ineligible for regional rankings.

Erik Perez is a veteran of BAMMA and the UFC. He trains at Jackson's MMA in Albuquerque, NM. He competes in the Bantamweight division. He currently holds the fastest knockout in UFC and WEC Bantamweight history with a 17 second knockout of Ken Stone at UFC 150.

His first fight in the UFC was a controversial one. His opponent, John Albert, nearly finished the fight multiple times with submission attempts. Perez was able to battle through and when Albert attempted a an armbar at the end of the first round, Perez was able to reverse it and get an armbar of his own. Although Albert never verbally submitted or tapped, the ref stopped the fight and called it a submission win for Perez. His next fight was against Ken Stone he made sure that he was the clear winner by knocking his opponent out in 17 seconds. He took on Byron Bloodworth at UFC 155. In an impressive preformance that saw Perez walk away with a first round TKO victory, he furthered his win streak to eight and became the first UFC bantamweight to finish his first three UFC fights.