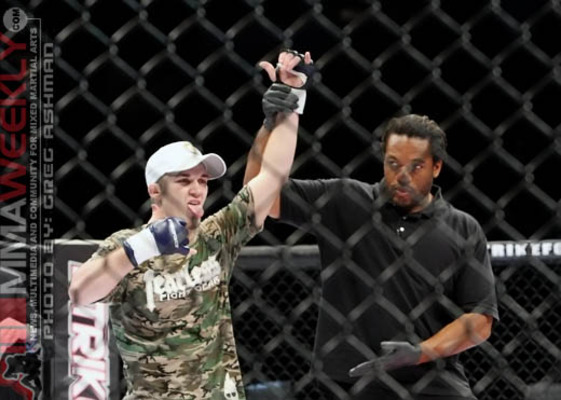 Bryan Caraway is ineligible for regional rankings due to inactivity.
Fighters must have at least one completed MMA bout in the past two years to be ranked.

Bryan Caraway began his MMA career going 6-1 as an amateur before deciding to go professional. He would fight for Strikeforce, EliteXC and WEC among other local promotions on his way to a 15-5 record. Caraway is also currently dating Miesha Tate who also fights for the UFC in the women's division.

In 2011 Caraway would earn his way into he house for The Ultimate Fighter Team Bisping vs. Team Miller with a victory over Eric Marriott by Unanimous Decision. He was selected for Team Miller and would win his next fight over Marcus Brimage by submission. He would face Diego Brandao in the semi-finals but would lose to the eventual winner by TKO.

He would still earn a spot on the UFC roster and would finish his first two fights by rear naked choke over Dustin Neace and Mitch Gagnon. He would drop his next bout with a close Split Decision loss to Takeya Mizugaki before getting back in the win column with a guillotine choke over TUF alum Johnny Bedford. He followed on that win by submitting Erik Perez less than 2 months later at UFC Fight Night 42: Henderson vs. Khabilov, thus improving his UFC record to 4-1 (4 submission wins, 1 split decision loss).

Episode 2 Caraway def. Marcus Brimage by Rear Naked Choke at 2:55 of Round 2