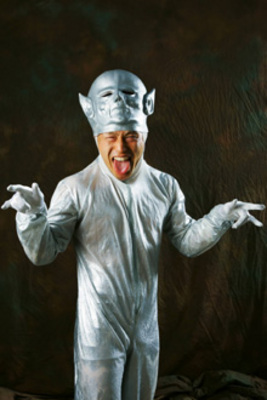 Tetsu Suzuki is ineligible for regional rankings due to inactivity.
Fighters must have at least one completed MMA bout in the past two years to be ranked.

Tetsu Suzuki is a Japanese mixed martial arts fighter and grappler most commonly known by his in ring name Hadairo Tetsu. Tetsu was born on November 2, 1977 in Mizusawa, Iwate, Japan. Tetsu fights out of the Wajyutsu Keisyukai gym and he competes in the bantamweight division.

Despite his mixed success throughout his MMA career, Tetsu has maintained himself a fan favorite in Japan due to his exciting grappling style of fighting and his entertaining persona. Tetsu commonly dresses up and cosplays as various fictional characters for his entrances such as Robocop, an alien, Toad from Super Mario Bros. among others.

Aside from MMA competiveness, Tetsu also has a background in judo, Shooto and has trained in the art of  “Nakedman” Jiu-Jitsu. In the grappling circuit, Tetsu has competed in the Abu Dhabi Combat Championship in various years in the -66 kg division. Tetsu has competed against the likes of Hiroshi “Iron” Nakamura, Masakatsu Ueda, Leonardo Vieira, Kohei Yasumi and Barrett Yoshida, among others.

Tetsu claims he's not human. He insist that he's an alien.