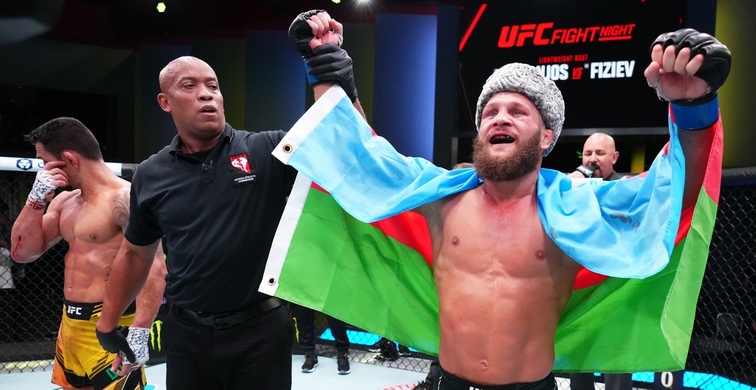 Fighting for a major organization has made Rafael Fiziev ineligible for regional rankings.

Rafael Fiziev was born in Korday, Kazakhstan and grew up in Kyrgyzstan. Fiziev's father is Azeri and his mother is Russian. A Shia Muslim, Fiziev recently renounced his allegiance to Kyrgyzstan over religious persecution he faced from Sunni clerics in that country. Fiziev now carries the flag of Azerbaijan (his father's homeland) in fights. Fiziev wears traditional Azeri headgear in press conferences and post-fight interviews. In his free time, Fiziev enjoys blacksmithing and cooking.

Fiziev began training in martial arts at a young age. Fiziev's father bought Fiziev and his cousins boxing gloves and had them spar with each other. Fiziev first took up Muay Thai at age eleven as a response to being bullied. Soon after Fiziev began learning combat sambo, boxing, and Brazilian jiu-jitsu to expand his martial arts knowledge. Fiziev is a blue belt in jiu-jitsu. Outside of MMA, Fiziev is most accomplished in Muay Thai. He is a threee-time Kyrgyzstan Muay Thai Champion, the 2010 World Muay Thai Federation Intercontinental 63.5 kg Champion, a Silver Medalist at the 2009 IFMA Junior World Championships, and a Bronze Medalist at the 2016 IFMA World Championships (B-class) 71 kg. Fiziev has a profesisonal Muay Thai record of 29-4.

Fiziev jumped straight into professional MMA and carried a 5-0 start into his UFC debut at UFC Fight Night: Overeem vs. Oleinik. Since his debut KO loss to Magomed Mustafaev, Fiziev has been on a 6-0 tear in the UFC. Fiziev has won Fight of the Night honors twice and Performance of the Night honors four times, a testament to his skill and fan friendly style. Fiziev has KO victories over Renato Moicano (UFC 256), fellow kickboxer Brad Riddell (UFC on ESPN: Font vs. Aldo), and Rafael dos Anjos (UFC on ESPN: dos Anjos vs. Fiziev).
Fiziev trains out of Kill Cliff FC (formerly Sanford MMA). Fiziev lives in Phuket, Thailand and spent many years training at Tiger Muay Thai in that city.