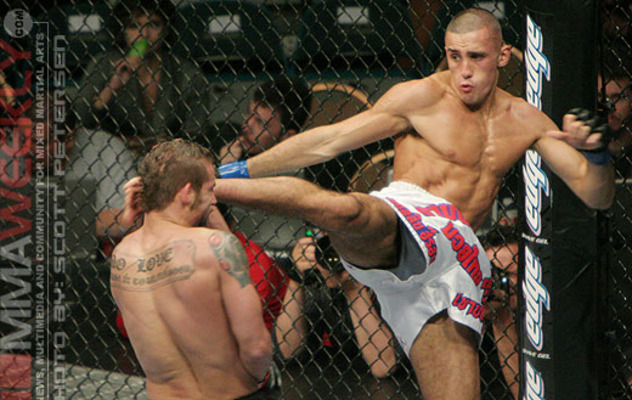 Terry Etim is ineligible for regional rankings due to inactivity.
Fighters must have at least one completed MMA bout in the past two years to be ranked.

After turning professional in 2005 and running his record to 10-0, including one fight in the UFC, many considered Terry Etim the future of the sport and the leading edge of its British contingent. Back-to-back losses in 2008 tempered some of those expectations, but Etim has nonetheless remained productive in his UFC career, having defeated Sam Stout and Justin Buchholz among others during his time with the promotion.

Although Etim has shown considerable improvement in his Muay Thai and kickboxing skills over his last few performances, his best asset remains the ground game. He has finished the majority of his wins by submission, often using his long legs and arms to sink in chokes on smaller lightweight fighters. He used his submission skills to finish off Edward Faaloloto in only 17 seconds of the first round for the Submission of the Night at UFC 138. He would lose his next fight by a vicious wheel kick from Edson Barboza in the third round of the fight at UFC 142. Etim would drop his next match to Renee Forte by Unanimous Decision and was also dropped from the UFC following the fight.