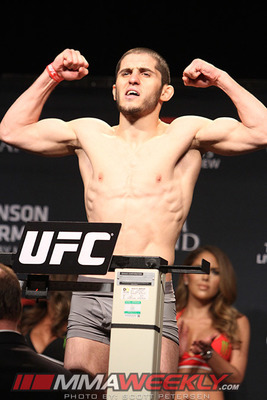 Fighting for a major organization has made Islam Makhachev ineligible for regional rankings.

Islam Makhachev is a dagestani born MMA fighter, he is currently signed to the UFC, where he competes in their lightweight divison. Islam trains with the undefeated former UFC lightweight champion Khabib Nurmagomedov who he grew up with.

Islam would make his MMA debut against Magomed Bekbolatov at Tsumada FC 4. He would defeat Magomed by unanimous decision. Following his successful debut, Islam would go on a tear winning his next ten fights which included wins over Vladimir Egoyan, Mansour Barnaoui, Rander Junio, Yuri Ivlev and Ivica Trušček before being signed to the UFC.

Islam would make his UFC debut against Leo Kuntz at UFC 187. He would finish Kuntz in the second round via rear naked choke. This win would pair the undefeated prospect up with Adriano Martins, a veteran of the fight game with over 30 fights under his belt. They would meet at UFC 192, where less than two minutes into the fight Islam would rush in on Martins which lead to him getting hit clean by a right hand from Martins which sent the dagestani to the ground which prompted the referee to stop the fight. Martins won the fight via KO at 1:46 of round 1.

Following this setback, Islam would be booked against Drew Dober at UFC on FOX 19. After the weigh-ins it was however announced that the fight was off the card as Makhachev had tested positive for the banned substence Meldonium. Islam would be issued a suspension and his fight with Drew would be scrapped. Less than three months after being suspended, Islam had a hearing with USADA which got his suspension lifted.

Following suspension being lifted, Islam would be back a few months later as he would meet up with Chris Wade at UFC Fight Night 94. Islam would take Wade down and control him there for a majority of the fight earning himself a unanimous decision and so Islam found himself back in the win column.

Makhachev would then beat Nik Lentz, Gleison Tibau and Kajan Johnson in a row before he got a scheduled fight against Francisco Trinaldo. Sadly the fight with Trinaldo would fall through as Islam withdrew for unknown reasons. He would be replaced with Alexander Hernandez who would beat Trinaldo via unanimous decision.

A few months after withdrawing from his bout with Trinaldo, Islam would take a short notice co-main event fight with UFC newcomer Arman Tsarukyan. Tsarukyan would get the better off the striking but Islam would take Arman down, these takedowns and the control time that came with it earned Islam the unanimous decision. He would follow this win up by beating Davi Ramos at UFC 242 via another unanimous decision. This fight with Ramos would however mark the last time we would see Islam for over a year as Islam would have three fights fall through, one against Alexander Hernandez and two against Rafael dos Anjos.

Islam would finally return to take on Drew Dober at UFC 259. This fight had been a long time coming as the pair had been matched up 5 years prior but Islam was forced out due to the failed drug test. Islam would dominate Dober on the ground, not allowing the American any chance to trade punches. Dober would succumb to a arm triangle choke a minute and a half into the third round.

Following his domination of Dober, Islam would find himself in his first main event as he took on the ranked Thiago Moisés. Islam would dominate the BJJ blackbelt on the ground, eventually catching him in a rear naked choke half way through the fourth round. This would mark Islams first ranked win and would see him move from number 9 to number 5 in the official UFC lightweight rankings.

Makhachev has yet to be the betting underdog in any of his fights, often closing as a huge favorite.

Islam Makhachev has been calling out half the divison and is looking to get himself a number one contendership fight next but what is next for the Dagestani born fighter remains to be seen.