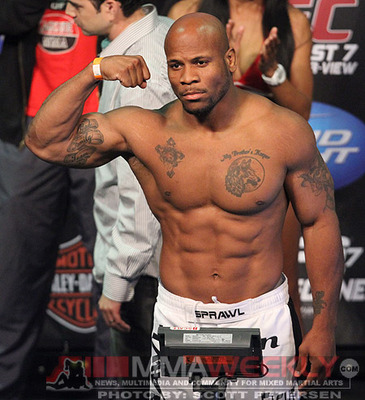 Rodney Wallace is ineligible for regional rankings due to inactivity.
Fighters must have at least one completed MMA bout in the past two years to be ranked.

Rodney Wallace began his MMA career in 2008. Rodney started out very well, and quickly became a prospect, going 9-0 before getting the call up to the UFC. During that stint, he had wins over the likes of Ovince St. Preux, Marcus Vantinen, Antwain Britt, and Aaron Stark. Entering the UFC against very talented Brian Stann was a big step up for Wallace, in a fight which he lost vis decision. He lost his next 2 UFC fights to Jared Hamman and Phil Davis. He was cut a month later.

He bounced back nicely with a hard fought decision victory over UFC vet David Heath at MFC 27. He was derailed by Emmanuel Newton about 4 months later, getting choked out in the second round. He won his next 2 fights by decision, defeating former TUF fighter Cale Yarborough and Derrick Mehmen. His next bout saw him getting KO'd in the first round against surging Polish MW contender Mamed Khalidov.

Since that defeat, he has gone 7-1-1, losing only to Michal Materla, another rising star from Poland.

*Rodney Wallace was a Division 2 All-Conference running back for Catawba College.

*His victories over Antwain Britt, Aaron Stark, and Gregory Millard were all part of a one-night tournament