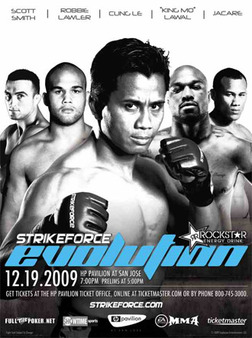 Tapology members can make predictions for upcoming MMA & Boxing fights. Strikeforce is closed for new predictions. 15 total members made predictions on this event, breaking down as follows below.

Leaderboard of the best predictions by member: Strikeforce Leaderboard

In the final Strikeforce event of 2009, Strikeforce: Evolution featured the promotional debut of Muhammed “King Mo” Lawal, who knocked out veteran heavyweight Mike Whitehead in the first round. In other action, Ronaldo “Jacare” Souza—also making his promotional debut—submitted Matt Lindland in the first round, while Gilbert Melendez avenged his loss to Josh Thomson with a Unanimous Decision win for the Strikeforce Lightweight Championship.

In a spectacular ending to the night’s main event, undefeated Sanshou kickboxer Cung Le was knocked out late in the third round by Scott Smith after dominating the majority of the fight with brutal striking.