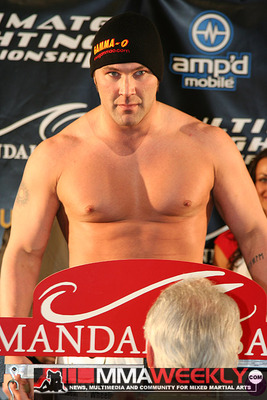 Branden Lee Hinkle is ineligible for regional rankings due to inactivity.
Fighters must have at least one completed MMA bout in the past two years to be ranked.

His name might be easy enough to remember, but aside from a one-sided beatdown he handed to Boston police officer Sean Gannon at UFC 55, slugger Branden Lee Hinkle has done little to establish himself as a mainstream name in modern mixed martial arts. Aside from the aforementioned victory over Gannon, who was famous for becoming the first man to defeat Kimbo Slice in one of his Youtube fight videos, Hinkle's only other notable victory came in a 2001 upset knockout victory over Jorge Rivera.