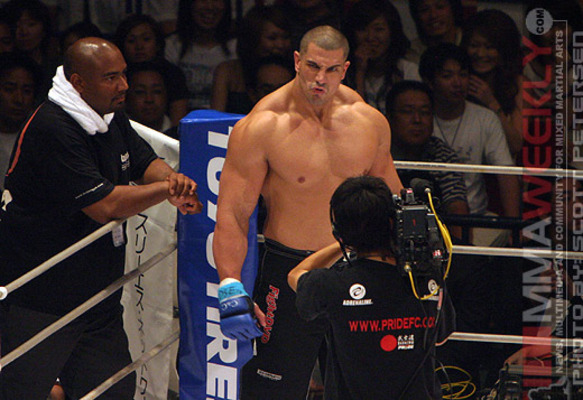 James Thompson is ineligible for regional rankings due to inactivity.
Fighters must have at least one completed MMA bout in the past two years to be ranked.

A cursory glance at James Thompson’s mixed martial arts record, which includes wins over Hidehiko Yoshida, Don Frye, and Dan Severn alongside prominent losses, might give one the impression that he is an average heavyweight. In reality, he has battled a consistently high level of opponent, and caught some bad breaks.

While Thompson began his career with a bang, winning 12 of his first 14 fights, he abruptly ran out of steam in 2006, losing three straight fights before the most dismal streak of his career in 2007-2009, where he went without a win in six fights, losing four of them by knockout. Known for rushing opponents from the opening bell as well as for his three-round battle with street fighting phenomenon Kimbo Slice on network television in 2008, Thompson will always have a place in MMA history. Though a suspect chin has held him back, Thompson has solid grappling ability and fights enthusiastically.

Thompson is currently on a five fight unbeaten streak, with 4 wins and 1 no contest with notable wins over Bobby Lashley, colin Robinson and former worlds strongest man Mariusz Pudzianowski. The no contest  came in Thompson's second encounter with Pudzianowski, Thompson was awarded a points decision only to have the decision changed the next day after Pudzianowski claimed he had won, and the judges had made a mistake. (not the first or last time Pudzianowski has influenced the judges in one of his fights)