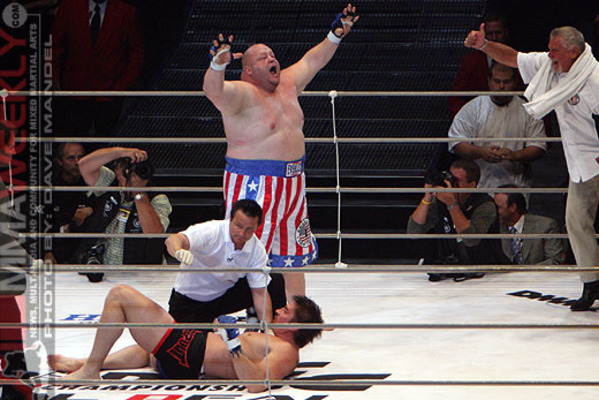 Eric Esch is ineligible for regional rankings due to inactivity.
Fighters must have at least one completed MMA bout in the past two years to be ranked.

Eric Esch gained his “Butterbean” nickname when he was forced to go on a diet of chicken and butterbeans in order to cut down to 400 lbs. to make weight for a boxing match. Although Esch never put together any serious wins as a professional boxer, he gained widespread popularity for his stellar record in local Toughman boxing contests. In addition to his boxing career, Esch was a professional kickboxer and MMA fighter, defeating the likes of Wesley Correira and James Thompson during his run, although he was never a major title contender.

Following his retirement from active competition in 2010, Esch entered the world of MMA fight promotion, co-promoting the inaugural Moosin: God of Martial Arts event in Worcester, Massachusetts along with Corey Fischer and Korean group Moosin. Butterbean is also known to casual fans for his department store boxing fight with Johnny Knoxville during Jackass: The Movie, during which he easily defeated the MTV superstar.