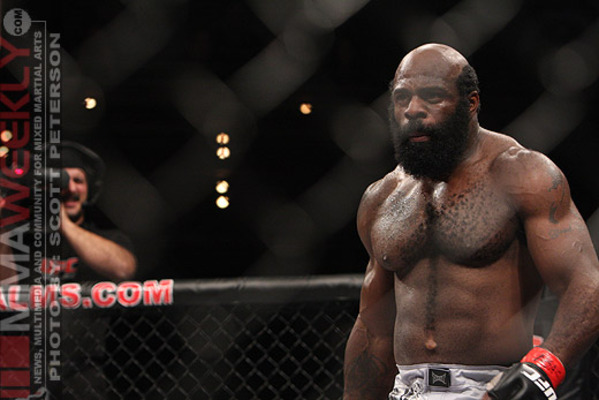 Kimbo Slice is ineligible for regional rankings due to inactivity.
Fighters must have at least one completed MMA bout in the past two years to be ranked.

A former Division I collegiate football player for the Miami Hurricanes who had fallen into work as a bouncer, Kevin “Kimbo Slice” Ferguson first made his name by competing in a series of underground street fights held in backyards and boat docks. The tapes of Ferguson dominating his opponents were uploaded across the internet and became a sensation. Ferguson received his “Slice” moniker after lacerating the face of one such YouTube opponent. He is now known as "Kimbo Slice," and is one of the most recognized, and infamous, fighting figures in history.

Seizing on his internet-fueled popularity, the now-defunct EliteXC promotion offered Ferguson a contract to compete in mixed martial arts. Ferguson debuted for the promotion in 2007 and ran his professional record to 3-0, with knockout wins over MMA pioneer Tank Abbott and veteran James Thompson, before suffering the first defeat of his career on live network television to journeyman and late fill-in Seth Petruzelli in October of 2008. The surprise knockout was a disaster for the teetering EliteXC and hastened its shuttering.

Following the deflating loss, in a move that shocked both fans and industry insiders alike, Ferguson was picked up by the UFC, where he was featured as the star attraction on the tenth season of the popular Spike TV reality show “The Ultimate Fighter.” Although he did not win the heavyweight tournament, Ferguson was given a contract with the promotion, and defeated veteran light heavyweight knockout artist Houston Alexander in his official UFC debut in December of 2009. Following a lackluster showing in which Ferguson was dominated by fellow Ultimate Fighter Matt Mitrione, Ferguson was released from the UFC.

While many MMA fans openly scoff at the idea of Ferguson competing in the top fight promotion in the world, the enigmatic fighter has continued to draw impressive TV ratings each time he fights, having been involved in several of the most-watched mixed martial arts events in the sport’s history. He has also drawn the praise of UFC President Dana White, who upon releasing Ferguson from the promotion nevertheless praised the fighter's heart and character.

Kimbo also competed for Cage Fury Fighting Championships against former WBO boxing heavyweight champ Ray Mercer. It was an unsanctioned exhibition match and Kimbo submitted Mercer in the first round with a guillotine choke.

Since being cut from the UFC Kimbo has decided to pursue a career in boxing. He made his debut in August of 2011 and finished his opponent in the first round. He has since gone on to a 6-0 record finishing all but one of his opponents. It remains to be seen if Kimbo can actually make an impact in the boxing world once he starts getting tougher opponents.