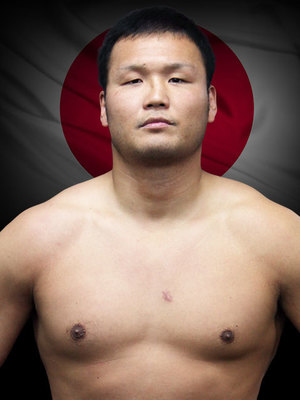 Yusuke Kawaguchi is ineligible for regional rankings due to inactivity.
Fighters must have at least one completed MMA bout in the past two years to be ranked.

Yusuke Kawaguchi is a Japanese mixed martial artist who fights in the heavyweight division. He is the former DEEP Megaton Champion and has also fought for DREAM, M-1 Global and KSW. Kawaguchi came in third place at the high school-level national Judo championships and third place at the 1999 University Judo Championships in the 100 kg weight class.

Kawaguchi made his mixed  martial arts debut on April 13, 2007 at DEEP - 29 Impact and defeated his opponent Hirotaka Fujiyama by majority decision. He went on to win his next two fights in the first round and in 2008, he took part in the 2008 DEEP Megaton Grand Prix. He TKO'd Nobuyoshi Takahara in the preliminary round and advanced to the quarterfinals where he faced former sumo wrestler Yoichi Babaguchi. Babaguchi rushed Kawaguchi at the beginning of the fight and was knocked out after just 16 seconds. Kawaguchi then advanced to the final stage, where the semi-finals and final were held in one night. In the semis, he came up against Shunji Kosaka, and beat him after his corner threw in the towel within 45 seconds of the first round. He then faced  Shunsuke Inoue in the finals. After two four-minute rounds, Kawaguchi emerged the victor by way of split decision to become the first DEEP Megaton Champion.

On October 23, 2008, Kawaguchi defended his title against Mongolian challenger Baru Harn at DEEP - 38 Impact, defeating Harn by majority decision. Seigo Mizuguchi, who Kawaguchi already beat in 2007, then challenged him at DEEP - 44 Impact on October 10, 2009. Kawaguchi opened the bout with an initial barrage of punches, dropping Mizuguchi in a corner. Mizuguchi recovered, however, tossed the champ over his hip and landed in side control, where he squeezed Kawaguchi’s head with a neck crank. Kawaguchi escaped and, as the visibly fitter of the two, proceeded to string together big punches for the rest of the bout. Gassed but still tough, Mizuguchi ate all of Kawaguchi's punches while throwing winging singles of his own. Though his face was red and swollen, Mizuguchi would not go down, prompting Kawaguchi to switch tactics midway through the bout, as he chopped him down with kicks. When Mizuguchi limped into a corner at the 1:27 mark of the third round, cornerman Kazuhiro Nakamura threw in the towel. Referee Yoshinori Umeki did not see the towel but stopped the bout soon after.

Another challenger then stepped up, this time in the form of Guam's Roque Martinez. He, too, was unable to defeat Kawaguchi who won by unanimous decision after three rounds. On January of 2011 Kawaguchi vacated the title.