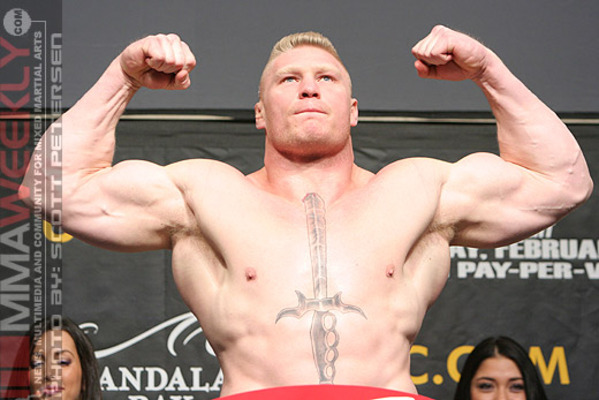 Brock Lesnar is ineligible for regional rankings due to inactivity.
Fighters must have at least one completed MMA bout in the past two years to be ranked.

Brock Lesnar is one of the Ultimate Fighting Championship’s premier cagefighters, and the biggest Pay-Per-View draw in the game today. Lesnar has parlayed the extraordinary strength and quickness he developed as a Division I national collegiate wrestling champion into a  punishing MMA top game, and boasts dominant TKO wins over heavyweight standouts Randy Couture, Frank Mir and Heath Herring. Lesnar’s unusual combination of size and quickness for a heavyweight – he has been known to cut weight to make the UFC’s 265 lb. weight limit – has compelled other UFC heavyweights to attempt additional strength training and weight-gaining techniques in order to keep up. Though he is not the first gargantuan wrestler to make a splash in MMA -- Lesnar immediately brings to mind Mark Kerr's halcyon days in Pride -- he is an upgrade in both skill and conditioning over any predecessor. Some believe he has permanently ushered in a new era of monstrous, weight-cutting 265 pounders who will dominate their smaller heavyweight counterparts. Time will tell.

In either case, the results have so far been clear. In November 2008, Lesnar seized the UFC World Heavyweight Championship belt in only his fourth professional bout, knocking out Randy Couture in the Main Event of UFC 91 in Las Vegas. He subsequently defended the title twice, including overcoming the equally imposing Shane Carwin to garner a second round submission victory, after barely escaping the first frame.

A championship fight against Cain Velasquez at UFC 121 saw Lesnar get TKO'd for the first time in his career and lose his Heavyweight title. Lesnar attempted to use his size advantage to swarm and overwhelm Velasquez from the opening bell, but liabilities in Lesnar's still-improving striking game were exposed once the pace of the fight slowed.

Lesnar can be controversial and often incendiary in his post-fights comments and behavior, most notably in his brutal UFC 100 TKO victory over Frank Mir to retain the championship, which Lesnar followed up by aggressively approaching and menacing the dazed Mir as he struggled to get up from the mat. Hero or heel, Lesnar’s antics have only increased his commercial appeal, and despite remaining green in his MMA career, he can consistently be counted on for huge UFC Pay-Per-View draws.

Lesnar is one of the most widely recognized athletes in MMA, having had an extensive career in staged professional wrestling prior to his fighting debut. Still boasting fewer than ten professional MMA bouts, Lesnar is nevertheless respected as one of the sport's most diligent workers and an extremely quick learner who figures to factor atop the heavweight title picture for many years to come. Along with his background in amateur wrestling, Lesnar has also received his Blue Belt in Brazilian Jiu-Jitsu under instructor Rodrigo Medeiros.

Following a continuous battle with a life threatening case of diverticulitis, Lesnar stepped back into the Octagon for the first time since his losing the UFC Heavyweight Championship. He faced off against promotional newcomer and former Strikeforce Heavyweight Champion Alistair Overeem at UFC 141 in a losing effort. Following the bout, Lesnar announced his retirement from mma, and several months later reappeared on WWE programming.

As of March 24, 2015, Brock Lesnar officially stated that he will re-sign with the WWE, thus closing any thoughts of him returning to the UFC. According to Lesnar, "I am officially closing the door on (return to) MMA. It was hard. I re-signed last night with the WWE" "Vince McMahon put an offer on the table last night that I could not refuse. I work part time for full time pay."