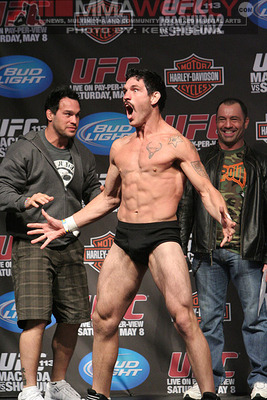 Fighting for a major organization has made Tom Lawlor ineligible for regional rankings.

Lawlor appeared on the eighth season of The Ultimate Fighter. He submitted Ryan Lopez with a rear naked choke in the elimination round to earn his spot in the TUF house. He was chosen by Frank Mir to be a part of Team Mir.

He was selected to fight first against Ryan Bader and despite a good showing, Lawlor lost by knockout in the first round, due to a ground and pound punches.

Lawlor had his second fight for the UFC, when he took on CB Dollaway at UFC 100. Tom won in an upset, putting Dollaway to sleep with a guillotine choke 55 seconds into the first round and was awarded Submission of the Night honors.

Lawlor fought Aaron Simpson on January 11, 2010, at UFC Fight Night 20. Lawlor showed off his improved striking skills in the first round by dominating Simpson, but lost a controversial split decision after gassing in the third round.

Lawlor was scheduled to face Tim Credeur on May 8, 2010, at UFC 113, but Credeur was forced off the card with an injury. Lawlor instead faced Joe Doerksen, losing via submission in the second round.

Lawlor earned a much needed victory over Patrick Cote on October 23, 2010, at UFC 121 in a performance that once again displayed Lawlor's superb wrestling and jiu jitsu skills by successfully executing five takedowns, threatening with submissions (nearly finishing Cote in the first round with an arm-triangle choke before Cote blatantly grabbed the fence to escape) in every round and showing his improved cardio as he easily cruised to a 30-27 unanimous decision victory.

Lawlor faced Jason MacDonald on May 15, 2012, his birthday, at UFC on Fuel TV: Korean Zombie vs. Poirier, He won the fight via KO in the first round and earned Knockout of the Night for his efforts.

Lawlor fought Francis Carmont on November 17, 2012, at UFC 154. Despite controlling the majority of the fight and threatening with several submissions, he lost the fight via a controversial split decision.

Lawlor faced Michael Kuiper on April 6, 2013, at UFC on Fuel TV 9. After losing the first round, he rebounded and won via submission, a guillotine choke, early in the second round. During his post victory speech, Lawlor had dedicated his fight to his late sister; Katie.

Lawlor was expected to face Ilir Latifi in a light heavyweight bout on July 19, 2014, at UFC Fight Night 46. However, Lawlor was forced out of the bout due to injury, and was replaced by promotional newcomer Chris Dempsey.

After over two years away from active competition, Lawlor returned to face Gian Villante on July 25, 2015, at UFC on Fox 16. He won the fight via knockout in the second round and also earned a Performance of the Night bonus.

Lawlor was expected to face Fábio Maldonado on November 7, 2015, at UFC Fight Night 77. However, Lawlor was forced out of the bout with injury and replaced by Corey Anderson.

Lawlor faced Corey Anderson on March 5, 2016, at UFC 196. He lost the fight by unanimous decision.

On November 4, 2016, Lawlor was provisionally suspended from the UFC stemming from an out-of-competition drug test conducted by USADA on October 10, 2016. Lawlor revealed that he failed for Ostarine, although he denied knowing the cause of the failure.

n February 2017, Lawlor was handed a two-year suspension. He became eligible to return to competition in October 2018.[29]

On August 13, 2018, Tom Lawlor was released from UFC, less than two months before his suspension was lifted.[30] At the time of his release, he held a record of 6-5 within the promotion.

Before the start of his MMA career, Lawlor worked two years as a professional wrestler on the Florida independent circuit, even taking part in a WWE tryout.

Lawlor returned to professional wrestling in February 2017, due to his suspension from UFC. But he had some previous special apperances at show since May 17, 2014.

in March 2020, Lawlor signed a contract to return to MMa competition with Professional Fighters League. Lawlor is expected to keep working as a pro wrestler before and after he makes his comeback to the cage.