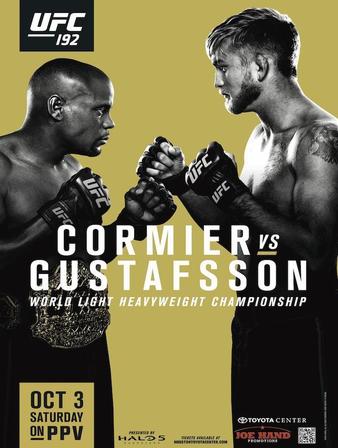 Tapology members can make predictions for upcoming MMA & Boxing fights. UFC 192 is closed for new predictions. 1,350 total members made predictions on this event, breaking down as follows below.

Leaderboard of the best predictions by member: UFC 192 Leaderboard

With the Main Event at UFC 192 we once again get to see Daniel Cormier take on a taller opponent with greater reach and many will say with better hands. Few will argue that Alexander Gustafsson doesn't deserve this title shot, but incidentally there are two higher ranked fighters over the contender. One being Jon Jones, the other Anthony Johnson who D.C. beat to win the Interim Belt while Jones serves his indefinite suspension from the UFC.
Gustafsson will likely try to keep the fight on the outside where his reach advantage can keep Cormier at bay. Daniel on the other hand, has become very good at closing the distance, dirty boxing and obviously using his grappling to get the fight to the ground.
It's been hard to predict how DC's fights will go. There's been several times where he was the underdog yet his durability and well-rounded MMA skills have brought him the victory. He's been fighting bigger opponents his whole career and his sole loss was against Jon Jones in a five round fight that went to the judges.
Alexander Gustafsson has seemed very frustrated at his last loss (first round, KO) back in January to Rumble Johnson. He'll be itching to redeem himself in hopes of taking home the light heavyweight belt in his second career attempt.