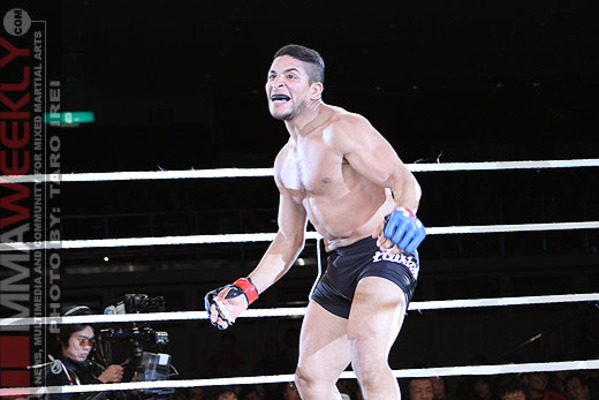 Maximo Blanco is ineligible for regional rankings due to inactivity.
Fighters must have at least one completed MMA bout in the past two years to be ranked.

Blanco, originally from Venezuela, trained in Tae Kwon Do for three years, reaching the rank of green belt, before being introduced to wrestling at the age of 14 by his cousin. Blanco competed in the sport for a year at German Villalobos High School, before being recruited to compete for the inaugural team at Sendai Ikuei Gakuen High School in Japan along with three other Venezuelans. Blanco faced problems with bullying and fitting in to a new society, but continued to excel at wrestling, winning All-Japan honors before being recruited again to compete at Nihon University. Upon graduating, Blanco continued competing and won International Championships in Venezuela, China, and Azerbaijan. Blanco was also a competitor at the 2007 Pan American Games and came close to winning a Bronze Medal in the 144 lb weight division, he later lost the third place match via points to Peruvian grappler Aldo Parimango.

In MMA,  He has fought in Pancrase, Sengoku, Strikeforce, and UFC. He holds notable victories over Hiroki Aoki, Katsuya Inoue, Tetsuya Yamada, Rodrigo Damm and Kiuma Kunioku, competing while representing Hidehiko Yoshida's 'Yoshida Dojo' in Japan before then switching slowly to 'Jackson/Wink MMA' in New Mexico.

After starting his career 2-2-1 Blanco went on a 6 fight win streak which included him winning the Lightweight King of Pancrase title. Blanco would then sign to Strikeforce where he was set to debut against Josh Thomson. Thomson however would dropout due to injury and be replaced by Pat Healy. Blanco would lose by Rear Naked Choke in the 2nd round. Blanco then joined the UFC and dropped to Featherweight where he debuted against Marcus Brimage. Blanco would drop a split decision.

Blanco faced Sam Sicilia at TUF 17 Finale winning a unanimous decision after an entertaining three round slugfestt. He would not fare so well in his next UFC outing against Akira Corassani at TUF 18 Finale however. After dropping Corassani early in the fight, Blanco, among the torrent of strikes, would deliver an illegal knee to his grounded opponent that would break Akira's nose in five different places. After the referee Mario Yamasaki called a time-out, Corassani claimed he was unable to continue and the referee would award him the victory via disqualification giving Blanco his second UFC defeat.

Blanco's next UFC outing would end in another disappointment as he dropped a unanimous decision verdict to Felipe Arantes at UFC Fight Night: Machida vs, Mousasi on February 15, 2014.

Blanco then faced Andy Ogle on May 31, 2014 at UFC Fight Night 41. He won the fight by unanimous decision.

Blanco next faced Dan Hooker on September 20, 2014 at UFC Fight Night 52. He won the fight via unanimous decision.

Blanco faced Mike De La Torre on July 12, 2015 at The Ultimate Fighter 21 Finale. He won the fight via TKO in the first round.

Group of Maximo Blanco fight videos combined into one compilation.