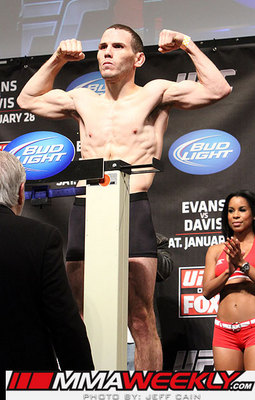 Eric Wisely is ineligible for regional rankings due to inactivity.
Fighters must have at least one completed MMA bout in the past two years to be ranked.

Illinois native Eric Wisely became a professional mixed martial artist in 2006, and has shared a cage with notables such as Eric Koch, Matt Veach, and Hermes Franca, a fighter than he has defeated twice in his MMA career. The taekwondo black belt would get his biggest opportunity when he agreed to fight veteran Pat Healy at 'Strikeforce Challengers: Gurgel vs. Duarte.' The undersized Wisely would lose a unanimous decision, but would get a shot in the UFC after winning another fight on the regional circuit.

Unfortunately for Wisely, he would be on the receiving end of a submission of the year candidate in a fight against Brazilian Charles Oliveira. Oliveira forced Wisely to tap out to a calf slicer, something not often seen in MMA. He would receive another opportunity, but would again lose, this time dropping a decision to English American Top Team product Jason Young. After this fight, he would be cut from the UFC.

In his first post-UFC fight, he would win the Pinnacle Combat lightweight championship, defeating Brian Geraghty via unanimous decision.