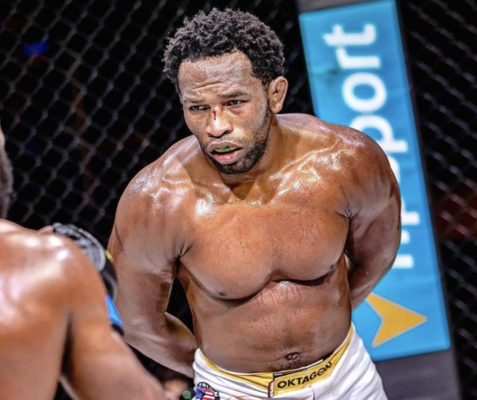 A former soccer player, Leandro "Buscape" Silva is a member of the famous Chute Boxe team.  While he also trains at Macaco Gold Team, the former World BJJ champion and BJJ black belt by Rocian Gracie Jr, "Buscapé" is considered one of the more technical lightweight strikers out of Brazil.  Silva competed on The Ultimate Fighter: Brazil 2, but lost his fight-in bout against David Vieira via unanimous decision.

With wins over the likes of Chris Wilson, Franklin Jensen and Gilmar Dutra Lima, the former TUF Brazil 2 contestant entered the UFC as a short notice replacement for Jason High against Ildemar Alcantara at welterweight.  Despite taking his UFC debut on short notice, Silva was released from the UFC following the single loss.  "Buscapé" went on to have a five fight winning streak outside of the UFC in regional Brazilian shows and Pancrase in Japan.  Following that run, Silva was welcomed back to the UFC at a more appropriate weight class, but suffered his first lightweight loss to fellow TUF Brazil veteran Francisco Trinaldo.  "Buscapé" returned to his winning ways two months later, defeating Charlie Brenneman by first round submission.

Silva met Drew Dober in his home country of Brazil, at UFC Fight Night 62: Maia vs. LaFlare. The most memorable moment of the fight was when Silva had Dober in a guillotine choke, after struggling to hold the submission, Dober was able to pull half-guard making the finish even harder for Silva to achieve. As Dober was pulling his head out of he choke referee Eduardo Herdy (who reportedly has a black belt in BJJ) stopped the fight - to the shock of both fighters and everyone watching.

After the fight Dana had strong words to say about Eduardo Herdy and encouraged Dober to file for a No-Contest ruling on the fight, something that may happen in the week to come. Something that Silva and his corner was criticized for was their excessive celebrating after the fight, when it should have be very clear to all parties that, that was a terrible stoppage. As the fight stands now Silva won via Submission in Round 2, at 2:45.