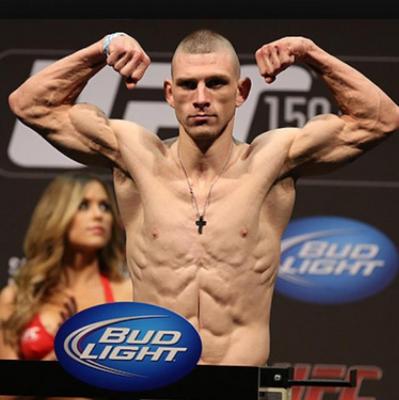 Fighting for a major organization has made Kurt Holobaugh ineligible for regional rankings.

Kurt Holobaugh is an American lightweight fighter. He is currently signed to Strikeforce. His career has been contested only in regional shows but he was able to compile an 8-0 amatuer record and is currently 11-2 in his professional career. Only one of his pro wins was by decision and the other 10 were finshes, 8 of them by submission. He trains out of Gracie Barra Northshore. Kurt gained some notability when he fought on his wedding day.

The first major break of Holobaugh's career came when he was signed to compete on the final Strikeforce card. He fought long time veteran Pat Healy. Although he was a heavy underdog, he impressed many by keeping up with the far more experienced Healy. He lost a decision but never stopped going for submissions the whole fight, his next fight was in the UFC against the tough Steven Siler but Holobaugh lost another hard fought decision and was cut , after that he won his next two fights although they were in regional promotions against lower opposition, however his two win streak got him a spot in Titan FC promotion against a tougher opponent; Eric Marriott. Perhaps if he puts together a bigger win streak he coulld find his way back into the UFC.