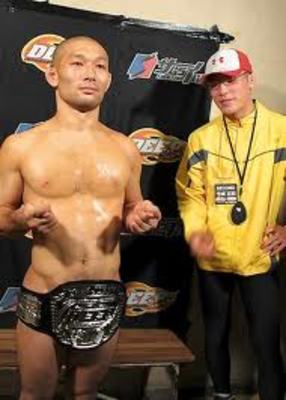 #72
Greatest MMA Grappler of All Time

Masakazu Imanari is a Japanese mixed martial arts fighter born on February 10, 1976 in Kanagawa Perfecture, Japan. Imanari is a BJJ black belt and is famously known as for submitting the most BJJ black belts in MMA and for his extensive use of diverse leglocks though mainly heel hooks.

He initially fought as a lightweight, and submitted fighters such as BJJ black belt Jorge Gurgel, and infamously shredded the knee of future WEC featherweight champion Mike Thomas Brown with a devastating knee lock. He went 0-2 as a lightweight in Pride, including a tough knockout loss to Joachim Hansen, then went back to fighting in Japanese promotion DEEP. He would then go on to take the Cage Rage featherweight championship from Robbie Olivier, and only needed 27 seconds, defeating Olivier by spectacular flying armbar.

After defending the Cage Rage featherweight title twice, he would continue fighting for DEEP until he made his DREAM debut at DREAM 7 against Atsushi Yamamoto, as part of the organization's featherweight grand prix. After a loss to Bibiano Fernandes in the tournament's quarterfinal, he would make the drop to bantamweight, where he currently fights. After a few more fights in DEEP, he would take part in DREAM's bantamweight grand prix, defeating Keisuke Fujiwara and Kenji Osawa in one night at DREAM: Fight for Japan! He would lose in the tournament final to veteran Hideo Tokoro by decision, but bounced back to submit Abel Cullum at DREAM 17 via armbar. After a loss to WEC vet Antonio Banuelos, he would make the move to One FC.

Imanari's next two bouts would take place under the ONE FC banner. His first fight was at One FC 3: War of the Lions on on March 31, 2012. He faced Kevin Belingon, winning the bout via reverse heel hook only one minute and eighteen second into the first round. Imanari's second fight would end in defeat, as he lost a unanimous decision to Leandro Issa at One FC 4: Destiny of Warriors on June 23, 2012.

Imanari would return to Deep at Deep - 59 Impact on August 18, 2012. He would square off with Masahiro Oishi, winning the bout via toe hold at only one minute and one second of the opening round.  In his only fight of 2013, Imanari would pick up a win over Kenichi Ito at Deep - 61 Impact on February 16.

2014 would be Imanari's least successful year since 2004-2005; he would drop three of four fights. His first bout of the year was unanimous decision loss to Yuki Motoya at Deep - 65 Impact on March 22, 2014. He would lose his second straight fight at Deep - 67 Impact, falling to Haruo Ochi via TKO. His lone win of the year came next against Chan Jung Park at Deep - 68 Impact, where Imanari would win via heel hook. Imanari would then lose his final fight of 2014, suffering a TKO loss to fellow Japanese stalwart Mizuto Hirota at Deep - 69 Impact.

The misfortunes of 2014 were completely reversed in 2015, as Imanari has won all of his fights thus far. He first bout was a rematch with Kenichi Ito at Grandslam MMA 2: Way of the Cage on February 8, 2015, which Imanari won via rear naked choke. He then defeated Daisuke Maku via armbar at Deep - Deep Hachioji Chojin Matsuri on April 5, 2015. His third straight win came at Venator FC - Guerrieri Italiani Finals on May 30, 2015, where Imanari defeated Cristian Binda via first round armbar.
Imanari's nickname is 'Ashikan Judan,' which loosely translates to 'The Master of Leglocks.' He is widely known throughout the MMA world as one of the best leglock artists out there, but possesses a wide array of submission as well, including a rarely seen omoplata crossface victory over Justin Cruz. This BJJ black belt is simply known as one of the best at what he does, and is a threat no matter where he is when the fight hits the mat.