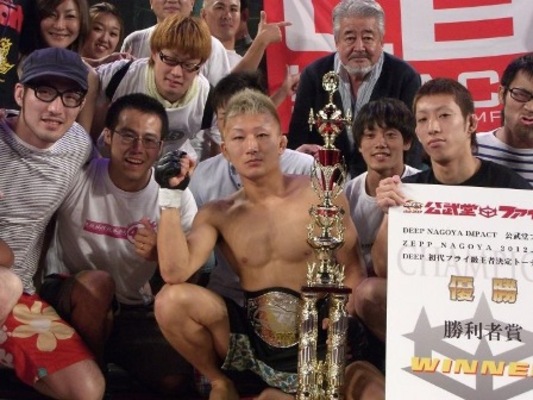 Fighting for a major organization has made Yuki Motoya ineligible for regional rankings.

Yuki Motoya is a Japanese mixed martial artist from Ishikawa, Japan born on September 14, 1989. Motoya trains with the CLUB BARBARIAN IMPACT. He is the current DEEP Flyweight champion.

Motoya made his professional mixed martial arts debut on March 7, 2010 losing a unanimous decision to Toshiki Kato. After losing his debut fight, Motoya went on a 3 fight win streak before losing 2 fights back to back. After the 2 fight losing streak, Motoya went back on a win streak in which he won and became the first DEEP flyweight titleholder defeating Yuya "MONKEY" Shibata in a title fight. Motoya next fought and defeated Shinobu Aoyama via TKO in a non-title fight. Motoya's first title defense came against Tatsumitsu Wada at DEEP 63 IMPACT, where he lost via majority decision, also losing his title in the process.

After losing his title, Motoya would beat 3 JMMA staples back to back in King of Pancrase Kiyotaka Shimizu, former DEEP  and Cage Rage champion Masakazu Imanari, and former DEEP champion and one time WEC title challenger Yoshiro Maeda, earning him a rematch against Wada. Motoya left no doubt about who the winner was this time, submitting Wada with a Rear Naked Choke in the 2nd round. This regained him the DEEP Flyweight title which he still holds today.

Up to this point Motoya has been a career DEEP fighter with all but his debut coming under it's banner. He will make his first trip outside the organization since his debut at RIZIN Fighting Federation at their Saraba event. He will face Chute Boxe's Felipe Efrain.