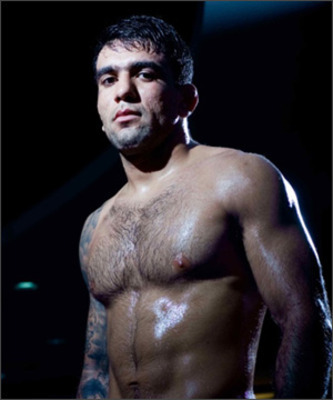 Leandro Issa is ineligible for regional rankings due to inactivity.
Fighters must have at least one completed MMA bout in the past two years to be ranked.

Leandro Issa is a Brazilian bantamweight fighter currently signed to the UFC. He is a Brazilian Jui Jitsu second degree black belt and trains out of Evolve MMA in Singapore. He is a highly accomplished BJJ player and has previously won the Mundials, the World Championship in 2004, and Brazilian National Championship in 2005. In MMA, he has a notable win over Masakazu Imanari and has previously fought for Art of War and ONE FC. Of his eleven wins, eight have been finishes including seven submissions.

Leandro would sign with ONE FC in 2011 and announced that he would drop to bantamweight for his debut with the promotion. He would take on Soo Chul Kim in the first bout of the inaugural event, ONE FC: Champion vs. Champion, which he would win by decision. This was the first fight of his career that went the distance. He would take on former DEEP two division champion, Masakazu Imanari, at ONE FC 4 and picked up a second straight decision victory to extend his winning streak to seven. He would rematch Soo Chul Kim at ONE FC 6, this time for the inaugural bantamweight championship. Leandro would lose for the first time in over four and a half years when he was defeated by TKO only fifteen seconds into the second round. He would bounce back with a unanimous decision win over Yusup Saadalaev at ONE FC 8.

In late 2013, it was announced that Issa had been signed to the UFC. He made his debut for the promotion in it's first event in Singapore at UFC Fight Night 34 against fellow debutant, Russell Doane. He would lose the fight via triangle choke with only one second remaining in the second round.