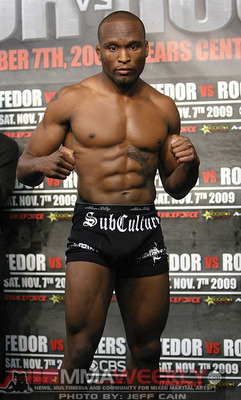 Shamar Bailey is ineligible for regional rankings due to inactivity.
Fighters must have at least one completed MMA bout in the past two years to be ranked.

Shamar Bailey made his Professional MMA debut in 2006, going 9-1 in his first 10 fights, with his only loss coming to current UFC fighter Roger Bowling. He would post more wins, bringing his record to 10-1 before getting a chance to fight on a Strikeforce card.

Bailey would win his debut against TUF veteran John Kolosci via unanimous decision. While Shamar Bailey was quickly becoming a prospect, he would be derailed by a much stronger and decorated wrestler in Justin Wilcox, in his next fight. In his next fight, Bailey was cut, forcing the fight to be stopped in between rounds. Next up for Bailey was TUF: Season 13

Shamar Bailey was a quarter finalist on The Ultimate Fighter Season 13, where he was a considerable favorite heading into the house. He would fall short to Chris Cope in the first round, being out classed on the feet en route to a decision. Even though he lost early, he was still given a shot to fight in the finale, defeating Ryan McGillivray by decision. He would lose his next two fights. First, to Evan Dunham via decision, and second to Danny Castillo, getting TKO'd in the first round. He was cut following the loss.

Since leaving the UFC, Bailey has been less than impressive, going 4-6 in his last 10 fights.