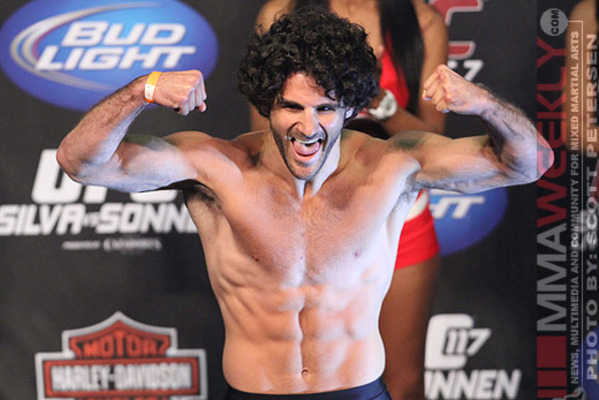 Charlie Brenneman is ineligible for regional rankings due to inactivity.
Fighters must have at least one completed MMA bout in the past two years to be ranked.

Charlie Brenneman is an American lightweight  fighter currently signed to the UFC. He is a blue belt in Brazilian Jui Jitsu and trains with the Miller brothers in New Jersey. He has a background in wrestling, having wrestled in high school and continuing on to wrestle at Lock Haven University where he finished off his career with a top twelve finish at the Division I Nationals. He has a Bachelors degree in Secondary Education and Spanish from Lock Haven as well as a Masters degree in Sports Management from East Stroudsburg University. He won the first season of the Spike TV reality show, Pros vs. Joes. Charlie has previously fought for Extreme Challenge, Ring of Combat, ShoXC, Valley Fight League, and Caged Fury FC. He was the welterweight champion in ROC and the lightweight champion in CFFC. He has notable wins over Jason High, Amilcar Alves, Rick Story, and Daniel Roberts. Of his nineteen professional wins, ten have been finishes with an equal number of submissions and T/KOs.

Brenneman left his career as a Spanish teacher after he won the first season of Pros vs. Joes in order to continue competing, this time in MMA. He started his amateur career in 2006 and went 5-0 in his first seven months. He would turn pro in the middle of 2007, debuting with a unanimous decision win for Extreme Challenge. He would then move over to Ring of Combat where he picked up the welterweight title. After a 5-0 start to his career, he would lose in his first title defense to future UFC fighter, John Howard. After the loss, he would bounce back with six straight wins in the next fourteen months including five finishes.

Brenneman would receive his shot in the big leagues at UFC Fight Night Florian vs. Gomi where he won a unanimous decision over Jason High. He would next be paired with Johnny Hendricks at UFC 117, but he would be finished for the first time in his career when he lost by TKO early in the second round. He would bounce back with a decision win over Amilcar Alves at UFC Fight Night 23.

Charlie was scheduled to take on TJ Grant at UFC on Versus 4, but the bout was scrapped shortly before the event due to an illness by Grant. Hours before the event, Nate Marquardt, who was scheduled to fight Rick Story in the main event, was declared ineligible to compete and Charlie was tapped to step in on ultra short notice. He later claimed that he had been told ahead of time that this was a possibility so he had been preparing for a fight with Story just in case. He would end up out wrestling Story on the way to a stunning upset win which threw him into the limelight.

Brenneman would lose his next fight when he was knocked out with a headkick midway through the first round by a much larger Anthony Johnson. He would pick up a unanimous decision win over Daniel Roberts at UFC on FX 1, but would be submitted for the first time in his career when he faced Erik Silva at UFC on FX 3. He was scheduled to take on Kyle Noke at UFC 151, but when the event was cancelled, the bout was moved to UFC 152. He would lose by TKO in the first minute of the fight. This marked the third time in four fights he had been finished and moved his overall UFC record to 4-4. He was subsequently release from the promotion.

Upon his release, he would drop to lightweight for the first time in his career. He would pick up four straight wins in the following nine months as well as the CFFC lightweight title. In early 2014, he was given another shot in the UFC when he agreed to step in on thirteen days notice to take on undefeated UFC newcomer, Beneil Dariush at UFC Fight Night 35. Unfortunately, he would lose by submission in the first round leaving his future with the company again in question.