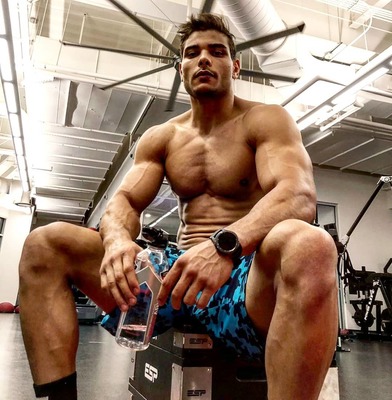 Fighting for a major organization has made Paulo Costa ineligible for regional rankings.

Paulo Costa is a middleweight fighter competing under the UFC banner and is also a 4 time Minas Gerais State jiu jitsu champion and a 3 time Brazil jiu jitsu champion. He made his professional debut in 2012 on the brazilian regionals where he managed to rack up two wins before getting a fight with BH Sparta where he would take on debuting Fabio Cyborg who Costa beat. This win let to him making it on to The Ultimate Fighter Brazil Season 3 where he would win his first match against José Roberto Rocha by submission in the second round before taking on Marcio Alexandre Jr. in the quarter finals. Costa would lose a split decision to Marcio which would mean the end of Costas run in the tournament. However since The Ultimate Fighter counts as exhibiton matches Costa remained undefeated professionaly.

Costa would continue fighting in Brazil for the next two years, during which he ended up signing with Jungle Fight, his first fight with the promotion was against the undefeated Bruno Assis who Costa knocked out in just over 1 minute into the first round. Following this performance the now 6-0 Costa was granted a shot at the vacant Jungle fight middleweight title against Eduardo Ramon. Costa got the submission halfway through the first round. After winning the title Costa made his first and only defense as he took on Adriano Balby. Costa knocked Balby out in the first round. This was enough for him to be signed to the UFC so Costa vacated his Jungle fight title and made his way to the octagon.

Costas promotional debut would be against Garreth McLellan at UFC Fight Night 106. Costa put him away via punches just over a minute into the fight. Costas next fight came against Oluwale Bamgbose at UFC 212: Aldo vs. Holloway who managed to make it through the first round before being stopped by Costa in the second. There two back to back finishes earnt Costa a dance with former welterweight champion Johny Hendricks at UFC 217: Bisping vs. St. Pierre. Hendricks was far past his prime and Costa put him away in the second round. His next fight would be against Uriah Hall at UFC 226: Miocic vs. Cormier. In the first round Costa landed multiple groin shots on Hall. Hall had a fair amount of success in the second round managing to drop Costa down to a knee but Costa weathered the storm and finished Hall halfway through the round.

This win over Hall earnt Costa a number one contender fight against multiple time title challenger and Olympic silver medalist Yoel Romero on the main card of UFC 241: Cormier vs. Miocic 2. After a close three round war the pair went the distance where Paulo Costa picked up the unanimous decision in the fight of the night. This win earned Costa a shot at the winner of the following months title unification bout between Interim title holder Israel Adesanya and undisputed champion Robert Whittaker. Adesanya would come out on top finishing Whittaker in the second round to become the undisputed champion. However Costa suffered an injury and was forced out of his title fight with Adesanya. Yoel Romero would take his place losing a boring fight in a controversial decision to Adesanya. A performance which Costa criticized. Now Costa having healed up was finally scheduled to take on the defending champion Israel Adesanya in the main event of UFC 253: Adesanya vs. Costa. With Costas size and strength combined with the lackluster performance from Adesanya in his last fight, Costa was given a decent chance at dethroning the champion. However what was to follow was a dominant performance by Adesanya as he pieced Costa up for two rounds before sending him crumbling to the ground at the end of the second round where Adesanya decided to dry hump him. This marked Costas first professional loss and a major setback in the career of the brazilian.

After losing to Adesanya, Costa has had two scheduled bouts, first he was scheduled to take on former undisputed champion Robert Whittaker but was forced to withdraw as he fell sick before the fight and was replaced with Kelvin Gastelum who Whittaker peaced up before winning a unanimous decision. He was then supposedly scheduled to take on knockout artist Jared Cannonier but Costa claims he never signed on to take the fight with Jared. Costa was then yet again replaced by Kelvin Gastelum who is currently scheduled to take on Cannonier.
As of the 26th of July 2021 Paulo Costa has yet to make his return to the octagon after his dominant loss to the middleweight king Israel Adesanya.