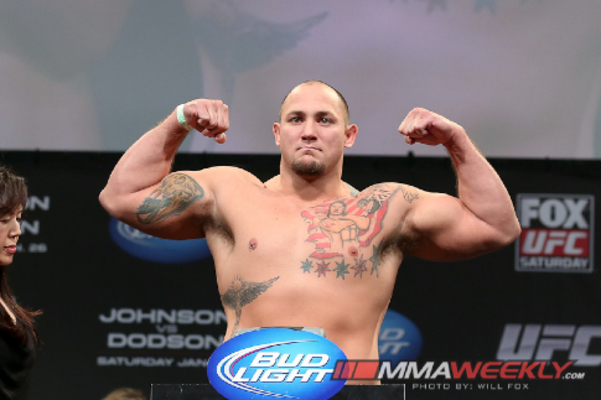 Shawn Jordan is ineligible for regional rankings due to inactivity.
Fighters must have at least one completed MMA bout in the past two years to be ranked.

Shawn Jordan is a former fullback to the LSU 2007 BCS National Championship team. Following his football career, Jordan would turn to mixed martial arts to express his competitive nature. Turning professional in 2009, over the next two and a half years, Jordan would amass an impressive record of 12-3. He had also secured notable wins over UFC veterans Derrick Lewis and Lavar Johnson.


Being on the active Strikeforce roster at the time of it's purchase by the UFC, Jordan's contract was picked up by the UFC to compete in its heavyweight division. Jordan's UFC debut would come against Oli Thompson at UFC on FX 2. Jordan would go on to win via TKO in the third round. His sophomore effort would come against UFC heavyweight staple, Cheick Kongo. Jordan would go on to lose a very uneventful unanimous decision. With his back against the wall, Jordan was slated to face Mike Russow at UFC on Fox 6 in Chicago. Russow, known for being a wrestler, heavily out struck Jordan in the first round. Jordan would persevere and finish Russow via TKO in the 2nd round. All of Jordan's next three bouts would end via knockout in the 1st round. Jordan would defeat Pat Barry and lose to Gabriel Gonzaga and Matt Mitrione, respectively. With his back once again against the wall, Jordan would secure and win a "must-win" bout with Jack May at UFC Fight Night 47. Jordan would add another knockout victory to his resumé. Jordan Is now slated to face UFC new comer Jared Cannonier at UFC 182.