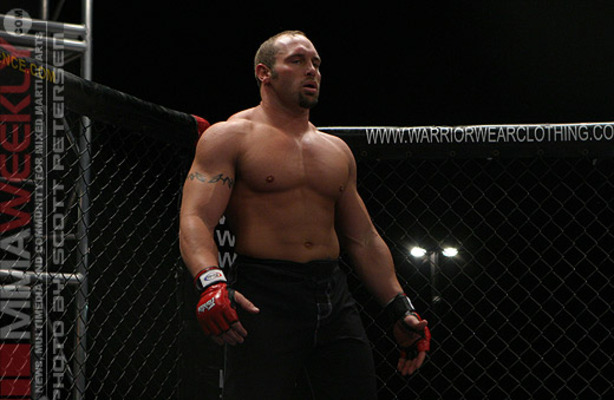 Shane Carwin is ineligible for regional rankings due to inactivity.
Fighters must have at least one completed MMA bout in the past two years to be ranked.

Shane Carwin burst onto the MMA scene in late 2005 when he defeated his first professional opponent by TKO in the first round. Although the win was impressive, it wasn’t until he followed it up with seven more first-round finishes in a row that he finally received a call from the top MMA promotion in the world, the Ultimate Fighting Championship. After debuting for the UFC in May of 2008, Carwin quickly reeled off consecutive first-round finishes over respected veterans Christian Wellisch and Neil Wain before moving into the deeper waters of the heavyweight division. Carwin’s first true test was a March 2009 battle with former top heavyweight contender Gabriel Gonzaga, a man who had knocked out the legendary Mirko Filipovic with a head kick two years earlier. Carwin passed with flying colors, knocking Gonzaga out in the first round after suffering a broken nose in the first exchange of the fight. In his follow up fight, Carwin knocked out the highly respected Frank Mir, ending yet another fight in the first round, to gain a shot at the title.

In the biggest moment of his professional life, Shane Carwin was brought face-to-face with Heavyweight Champion Brock Lesnar under the brightest spotlight available in modern MMA. In a thrilling fight, Carwin nearly brought home the gold, badly rocking the champion and pinning him against the cage for almost a round's worth of pounding. Unfortunately for Carwin, the exertion of his frenzied attack coupled with a Main Event adrenaline dump left nothing more in his gas tank. He returned for the second round winded and unable to fight up to his abilities. Lesnar quickly took Carwin down and submitted him to retain the title and deliver Carwin his first pro loss.

Although he is known for his aggressive and powerful striking assault, Carwin is also a two-time NCAA Division II Wrestling National Runner-Up, and an NCAA Division II National Champion in 1999. In addition to his wrestling background, Carwin is one of the largest men in the heavyweight division, standing well above six feet tall and usually cutting down substantially for the heavyweight limit of 265 lbs. for his fights.

Despite his blossoming professional fighting career, the Western State College graduate continued to work full time as an engineer in his home state of Colorado while pursuing his heavyweight MMA career.

In late 2012 Carwin coached the 16th season of The Ultimate Fighter and was scheduled to face off against Roy Nelson in the finale in December. Prior to the Nelson fight, Carwin had been out for over a year recovering from a back surgery that took longer than expected to recover from. Unfortunately just weeks prior to the bout Carwin was forced to withdraw, this time suffering a knee injury during training. Carwin would fight Juniou Dos Santos at UFC 131 but would lose a Unanimous Decision to the future champ.

On Tuesday May 7th 2013 Carwin announced that he was hanging up the gloves and retiring from the sport via his twitter account.

In this video produced by Carr Knowledge Interactive Marketing & Advertising, Shane Carwin is shadowed as he lives a day in the life as a top UFC heavyweight fighter.