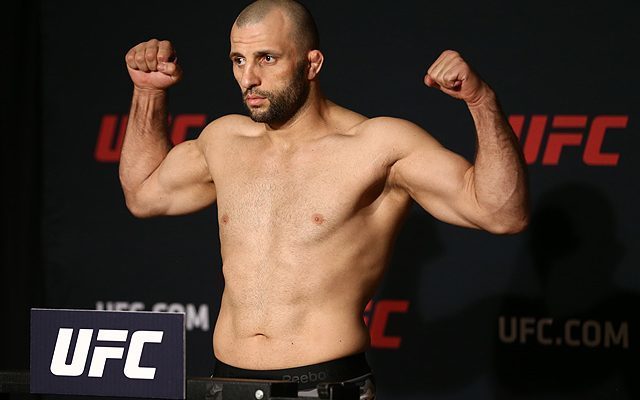 Fighting for a major organization has made Gadzhimurad Antigulov ineligible for regional rankings.

Antigulov fought in the Russian circuit for 9 years, and he was the two times light heavyweight champion for Absolute Championship Berkut. He amassed a record of 18-4 prior joining UFC.

Antigulov made his promotional debut on November 19, 2016 at UFC Fight Night: Bader vs. Nogueira 2 against Marcos Rogério de Lima. He took his first UFC win via a guillotine choke on 67 seconds into round one. He earned the Performance of the Night bonus.

Antigulov was expected to face Ed Herman at UFC 209 on March 4, 2017. The bout was removed due to Herman citing injury.

On May 13, 2017, Antigulov faced Joachim Christensen at UFC 211. He won the fight via a rear-naked choke in the first round.

Antigulov was scheduled to face Ion Cuțelabaon November 4, 2017 at UFC 217. However, Antigulov pulled out of the fight on September 26 citing an injury, and was replaced by newcomer Michał Oleksiejczuk.

Antigulov was expected to face Aleksandar Rakić on February 24, 2018 at UFC on Fox 28. However, it was reported on February 7, 2018 that Antigulov was pulled from the fight, citing injury, as a result, the bout was cancelled.

The bout with Ion Cuțelaba eventually took place on July 28, 2018 at UFC on Fox 30. Antigulov lost the fight via TKO in the first round.

Antigulov was briefly linked to a bout to face newcomer Roman Dolidze on April 20, 2019 at UFC Fight Night 149. However, Dolidze was replaced just days later for undisclosed reasons by Michał Oleksiejczuk. Antigulov lost the fight via knockout in the first round.