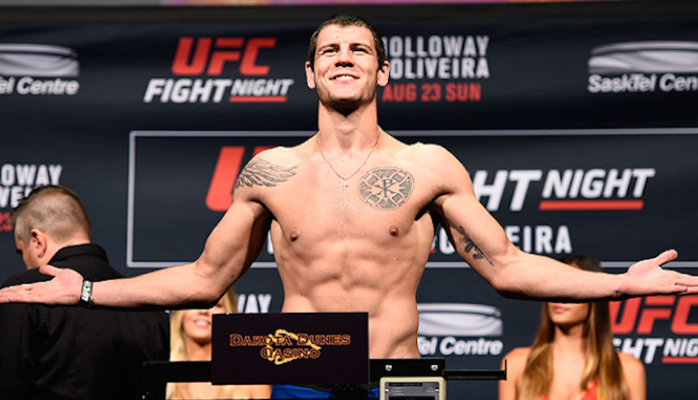 Fighting for a major organization has made Nikita Krylov ineligible for regional rankings.

Krylov began training in MMA after high school in 2012. In his first five months of competition, he was able to rack up a perfect 12-0 record including winning three fights in eight days. He would lose for the first time to Vladimir Mishchenko at the end of 2012. He would rebound by winning a one night, four man tournament three weeks later, but would again lose in a rematch with Mishchenko. In April, 2013, he would have his first fight outside of the Ukraine when he knocked out the previously undefeated Gabriel Tampu at M-1 Challenge 38 in Russia.

In mid 2013, Nikita was signed by the UFC. He made his promotional debut against fellow debutant, Soa Palelei, at UFC 164. After a back and forth brawl, both fighters were visibly fatigued in the third round when Palelei finished Krylov with strikes. This was the first fight in which Nikita had been past the first round. He next faced Walter Harris at UFC on Fox 10. Despite being a heavy underdog (at -420/+330 betting lines) and a much smaller fighter (giving up 23 pounds in weight and 3.5 inches in reach), Krylov came out quickly and aggressively, knocking his muscular opponent down with a head kick and sealing the deal with punches at only twenty five seconds into the first round.

He would drop to light heavyweight for his next fight when he took on Ovince St. Preux at UFC 171. However he would not fair as well and was submitted in the first round by St. Preux.

After being submitted by St. Preux, Krylov would meet Cody Donovan, at UFC Fight Night 46: McGregor vs. Brandao, Krylov would finish off Donovan just before the end of Round 1, when referee Marc Goddard stopped the fight, giving Krylov his second 1st Round KO/TKO in the UFC.

Krylov would see his hand raised not longer after, at UFC on FOX 14: Gustafsson vs. Johnson, when he submitted Stanislav Nedkov at 1:24 in Round 1.