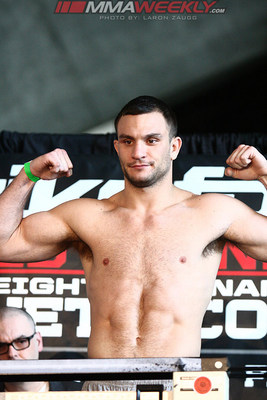 Fighting for a major organization has made Gian Villante ineligible for regional rankings.

Gian Villante grew up in Levittown, New York. During his Junior Year of High School, he placed 3rd in the New York State Wrestling Championships. He followed this up his Senior Year by winning the New York State Championship at the 215 pound weight class. Villante drew interest from major Division I schools, such as Penn State and Michigan State, but chose to stay close to home and attended Hofstra University from 2003-2007, where he continued his successful wrestling and football careers.

In the 2004 football season Villante was named a 2004 1st Team Defensive I-AA All-American by The Sports Network. He was regarded as a potential NFL linebacker prospect. The Giants, Jets, Colts, and Eagles all expressed interest in Villante.

Villante wrestled for Hofstra where he became close with NCAA All American wrestler and future UFC Middleweight Champion, Chris Weidman.

On January 11, 2011, it was announced that Villante had signed a multi-fight deal with Strikeforce. Villante was quickly thrown into a Heavyweight Grand Prix Reserve bout on short notice. His opponent would be Chad Griggs in one of three heavyweight grand prix reserve bouts at Strikeforce: Fedor vs. Silva. In which many people called the fight, the "Fight of the Night." He lost the fight via TKO in the first round on a referee stoppage.

Villante made the decision to drop back down to light heavyweight. In his next bout, Villante would take on undefeated prospect Lorenz Larkin on June 24, 2011 at Strikeforce Challengers: Fodor vs. Terry. After repeatedly taking down Larkin and easily taking the first round, Villante appeared to be suffering from his dramatic weight cutting. Villante began to tire and eventually Larkin went on to win a unanimous decision. Questions began to swirl as to whether or not Villante could effectively complete a Three Round Fight. He was also criticized for not sticking to a wrestling game plan.

In his next fight, Villante took on Kieth Berry in the Strikeforce Challengers: Gurgel vs. Duarte preliminary card. Berry and went on to win the fight unanimously on the judges scorecards.

Villante's next fight was against Trevor Smith on the preliminary card of Strikeforce: Rockhold vs. Jardine on January 7, 2012. Gian quickly attacked Smith catching a leg strike four seconds in. After landing several clean punches and knees on the ground, both stood up. The two trade strikes for about thirty seconds, when Villante once again caught a Smith kick and took him down. Villante held onto the leg and began landing numerous unanswered right hands, prompting referee Kim Winslow to stop the fight at 1:05 of the first round.

Gian continued his win streak with a unanimous decision victory over Derrick Mehmen. This was part of the Strikeforce: Barnett vs. Cormier undercard seen on Showtime Extreme. Gian was credited by announcer Frank Shamrock for his improved standup and his endurance during the fight. Mehmen had visible bruising on his thighs from the multiple leg kicks landed by Villante.

In January 2013, the Strikeforce organization was closed by its parent company Zuffa. A list of fighters scheduled to be brought over to the UFC was released in mid-January and Villante was one of the fighters listed.

For his UFC debut, Villante faced fellow promotional newcomer Ovince St. Preux on April 27, 2013 at UFC 159. The fight ended in unusual fashion as St. Preux accidentally poked Villante in the right eye with his thumb and referee Kevin Mulhall immediately called an end to the fight after asking Villante if he could see. As a result of the injury, the fight went to the judges' scorecards and St. Preux won a majority technical decision.

Villante took a short notice bout, replacing Robert Drysdale against Cody Donovan on November 16, 2014 at UFC 167. He won the fight via TKO in the second round, earning his first official UFC victory.

For his third fight with the promotion, Villante faced Fabio Maldonado on March 23, 2014 at UFC FN 38. He lost the fight via unanimous decision.

His next fight under the UFC banner was on June 28th in Auckland, New Zealand at UFC Fight Night 43: Te Huna vs. Marquardt against another UFC LHW also coming off of a loss in Sean "The Real OC" O'Connell. He went on to defeat O'Connell by split.