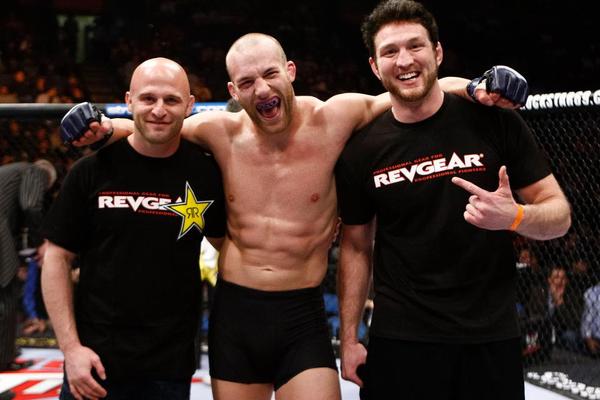 Patrick Cummins is ineligible for regional rankings due to inactivity.
Fighters must have at least one completed MMA bout in the past two years to be ranked.

Patrick Cummins is an American light heavyweight fighter currently signed to the UFC. He is a former All American wrestler at Penn State and trains out of Dana Point, California. He has previously fought for Strikeforce and ProElite. He has a Bachelors degree in Fine Arts from Penn State. In 2011, he was sentenced to one year in jail after being convicted of burglarizing several fraternities at Penn State in 2008. Of his four professional wins, all have been finishes with equal numbers of submissions and T/KOs.

Cummins was a walk on to the Penn State wrestling team. By his senior year, he was a two time All American and finished second in the NCAA national tournament. After college, he went on to be a part of two national wrestling teams, including one that had him as a training partner to Daniel Cormier as he trained for the 2008 Olympics.

In 2010, Pat was selected to take part in the EA Sports MMA Fighter Exchange. After traning in Brazil with the program, he was given his first professional fight in 2010. He took on Terrell Brown in Strikeforce and was able to pick up a first round TKO. He did not fight again until early 2012 due to a one year jail sentence for Burglary stemming from a 2008 incident at Penn State. He was able to defeat Tasi "The Tyrant" Edwards at ProElite 3 by first round submission. He would again take a year off from competition but would go 2-0 in 2013 with two more first round finishes over opponents that had 0-1 and 5-13 records before the fight.

In Febuary 2014, Cummins began a campaign to replace an injured "Sugar" Rashad Evans against Pat's former training partner, Daniel "DC" Cormier. The UFC quickly agreed to sign Cummins to take the fight at UFC 170. Leading up to the fight, Cummins made numerous remarks about Cormier, including statements that he made Cormier cry in training. When the fight happened, Cummins was unable to mount any offense and was quickly finished by TKO at 1:19 of the first round marking his first professional loss.

Cummins won by 2nd rd KO/TKO over Roger Narvaez. at UFC Fight Night 43: Henderson vs. Khabilov.  Cummins is next scheduled to face Kyle Kingsbury  on July 26th, 2014 at UFC on FOX 12: Lawler vs. Brown.