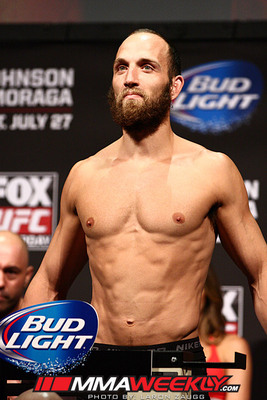 Trevor Smith is ineligible for regional rankings due to inactivity.
Fighters must have at least one completed MMA bout in the past two years to be ranked.

Trevor Smith is an American middleweight fighter currently signed to the UFC. He trains out of Ring Demon Jiu Jitsu in Tukwila, Washington. He holds a bachelors degree in Marketing from Iowa State University. He has previously ought for Strikeforce and Cagesport where he was the light heavyweight champion. Of his eleven professional wins, ten have been finishes with nine coming by submission. He has won the UFC "Fight of the Night" bonus one time.

Snith began training in grappling while he wrestled in college as a way to stay in shape. He began his MMA career in 2009 and fought near his home through the early part of his career. He would achieve a 7-1 record in just over two years with all of his wins coming by first round finishes. Smith's first big break came in 2011 when he was signed by Strikeforce. In his three fights with the promotion, he went 2-1 with both wins coming by submission. He took on Tim Kennedy at Strikeforce's last event. Although he was able to keep up with Kennedy's ground game, he ultimately surcame to a guillotine choke in the third round. The two were originally supposed to meet at Strikeforce: Cormier vs. Mir but the event was cancelled.

When Strikeforce ceased operations, Trevor was moved over to the UFC. He made his promotional debut against Ed Herman at UFC on Fox 8. Although he would lose a split decision, he was awarded the "Fight of the Night" bonus. He next fought Brian Houston at UFC Fight Night 35 and was able to pick up a split decision win