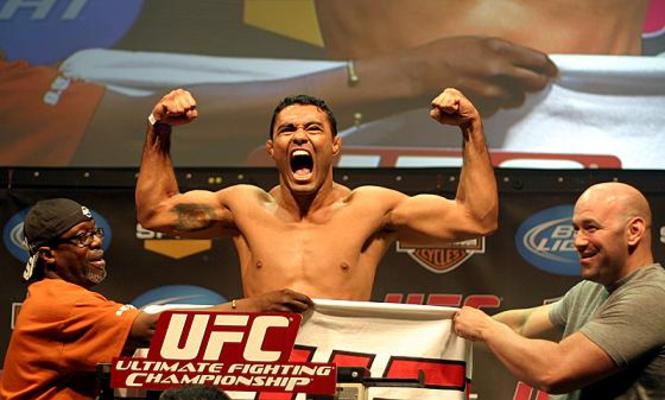 Rafael Natal is ineligible for regional rankings due to inactivity.
Fighters must have at least one completed MMA bout in the past two years to be ranked.

Rafael Natal is a middleweight fighter currently signed to the UFC. He holds a Brazillian Jui Jitsu black belt under Vinny Magalhaes and currently trains out of Renzo Gracie's academy in New York. He is a veteran of Ring of Combat, Moosin, and the UFC. He holds notable wins over Danillo Villefort and Travis Lutter. Of his seventeen wins, eleven have been finishes including eight submissions. He has earned the "Fight of the Night" bonus one time.

Natal began his career in 2005 fighting around Brazil. After compiling a 7-1 record, he began fighting in the US, primarily for the Ring of Combat promotion out of Atlantic City, New Jersey. He was able to bolster his record to 12-2, topped off with a knockout of former UFC title contender, Travis Lutter.

In 2010, Rafael would earn a spot in the UFC, but would lose his debut against Rich Attonito by decision. He would next take on a Jesse Bongfeldt in his promotional debut. Despite winning the first two rounds, Natal would get dominated in the third and the fight would be ruled a majority draw with two of the judges scoring the final round 10-8 Bongfeldt. He would earn his first UFC victory when he was able to earn a decision win over Paul Bradley at UFC 133. He would earn another decision victory six months later over Michael Kuiper. Natal nearly earned his first UFC finish when he fought Andrew Craig, but Craig was able to survive the onslaught and defeat Rafael with a head kick knockout in the closing seconds of the second round.

Natal was able to bounce back with a third round submission win over Sean Spencer. He next defeated Joao Zeferino by decision when he fought in Brazil for the first time in five years. He earned his first "of the Night" bonus for his fight against Tor Troeng when he was able to earn a decision victory as well as the $50,000 "Fight of the Night" bonus. He was set to fight Ed Herman at UFC 167 but volunteered to step in to fight Tim Kennedy at UFC: Fight for the Troops 3 ten days earlier. Leading up to the fight, he described fighting the Army veteran, Kennedy, as "fighting in Kennedy's own house" since the fight was on a US military base. Natal would lose by knockout late in the first round.

Natal's next fight was against Ed Herman at UFC Fight Night 40: Brown vs Silva, on 10 May, 2014. Natal lost via unanimous decision .

Natal's following fight was against Chris Camozzi at UFC Fight Night 50: Jacare vs Mousasi, on 5 September, 2014. It was an extremely close fight, with Natal squeezing out a split decision.