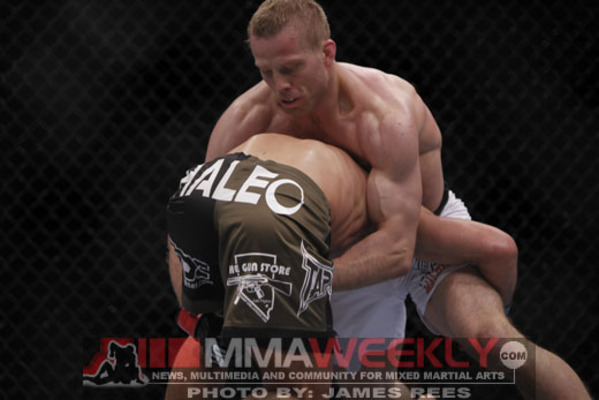 Nick Ring is ineligible for regional rankings due to inactivity.
Fighters must have at least one completed MMA bout in the past two years to be ranked.

Nick Ring is an American middleweight fighter currently signed to the UFC. He a black belt in Muay Thai under Mike Miles as well as a brown belt in Brazilian Jiu Jitsu and he trains out of the Tristar Gym. He had an 18-1 kickboxing record as a professional as well as a 23-4 record as an amateur. Ring also tried his hand at boxing compiling a 4-1 record. He has previously fought for Deep and Bellator as well and holds notable wins over Riki Fukuda, James Head and Court McGee. Of his thirteen wins, eight have been finishes including six submissions.

Ring decided to begin learning martial arts after watching a kickboxing match when he was fifteen. After compiling an impressive kickboxing record, he decided to turn his attention towards MMA stating "eventually what I liked about MMA versus kickboxing - and I love kickboxing - was just the whole ground aspect. I like the purity of an MMA fight." He had his first professional MMA fight in 2002, picking up a submission in just twenty two seconds. The following year, he would rattle off three wins in two months before taking over two years off from the sport. In 2005, he would fight for the first time outside of Canada. He would continue his undefeated streak with two wins in Hawaii and a decision victory in Deep in early 2006.

A knee injury would sideline Nick for thirty nine months, but in that time, he would take up professional boxing where he earned a 4-1 record with two knockouts. He would make his return in 2009 at Bellator 9 with a thirty nine second submission of Isidro Gonzalez. He would pick up two more wins in Canada later that year bringing his undefeated record to 10-0.

In early 2010, Ring was selected to be a part of the eleventh season of The Ultimate Fighter. He was selected as the first overall pick for Team Ortiz. He took on eventual winner Court McGee in the first round of the tournament and was able to pick up a decision win. McGee was brought back in as an injury replacement and the two were supposed to rematch in the quarterfinals, but Ring found out that he needed a third ACL reconstruction and had to withdraw from the tournament.

After another year long layoff, Nick was able to make his official UFC debut at UFC 127 against fellow debuter and former Deep middleweight champion, Riki Fukuda. He was able to pick up the win by an extremely controversial unanimous decision. Ring would pick up another UFC victory when he was able to defeat Jame Head via submission with less than two minutes left in the fight which improved his record to 12-0. He would face his first loss in the UFC and his professional MMA career at the hands of Tim Boetsch when he lost by unanimous decision. He would follow that up with a rematch against Court McGee at UFC 149. He was again able to win a very close fight via controversial unanimous decision. In his next fight, Ring lost a split decision to fellow TUF 11 alum Chris Camozzi, at UFC 158 by split decision. He was next slated to take on Caio Magalhaes at UFC Fight Night 33. He was the favorite going into the fight, but in the last two rounds, he would be outgrappled on his way to a unanimous decision loss.

With Ring losing 3 out of his past 4 fights, he was released from the UFC. Ring is expected to fight for two different promotions located in his home province of Alberta; Hard Knocks Fighting and Havoc FC, in the coming months.