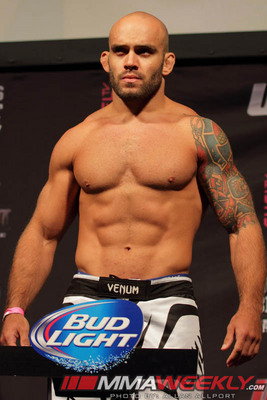 Fighting for a major organization has made Bruno Santos ineligible for regional rankings.

Bruno Santos is a Brazilian middleweight fighter currently signed to the UFC. He is a former middleweight champion for Bitteti Combat. Of his thirteen career wins, only three have been finishes including two submissions. He has gone to decision in each of his last eleven fights.

Santos began his career in 2007. He fought primarily in his home country of Brazil and racked up a 12-0 record in his first four years of competition. In 2012, he was signed by Bellator. He won his debut fight with the promotion against highly touted submission artist, Giva Santana, at Bellator 61. He was expected to take on Brian Rogers at Bellator 66, but a shoulder injury forced him off the card.

In late 2013, he was signed by the UFC. He made his promotional debut against fellow undefeated fighter, Krzysztof Jotko, at UFC Fight Night 33.  He went into this fight after a twenty one month layoff and had not finished an opponent in over five years. He would go to decision again in this fight, but would suffer the first loss of his career.

Santos' dry-spell of being unable to finish opponents continued when he faced Chris Camozzi at UFC 175: Weidman vs. Machida; the fight was close, going to the judges decision, it went in Santos' favour by Split Decision.

Santos is expected to face Elias Theodorou at UFC Fight Night 54: MacDonald vs Saffledine on 4 October.