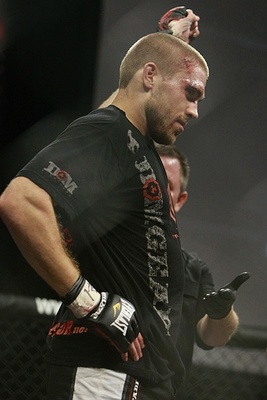 Andrew Craig is ineligible for regional rankings due to inactivity.
Fighters must have at least one completed MMA bout in the past two years to be ranked.

Andrew Craig is a middleweight fighter currently signed to the UFC. He is a veteran of of Bellator, Legacy FC and the UFC. He held the miiddleweight title in LFC. He holds notable wins over Kyle Noke, Raphael Natal and Chris Leben. Of his nine wins, four have been finishes including three T/KOs. He has earned the "Fight of the Night" bonus one time.

Craig began his professional in 2010 and quickly racked up four wins in his first nine months including a win in Bellator. He was given a title fight in Legacy FC and was able to secure the middleweight strap via fifth round TKO. He was set to defend his title five months later but his opponent missed weight so it became a non title fight but Andrew was still able to win a unanimous decision victory.

In early 2012, Craig was tapped by the UFC as a late replacement against Kyle Noke. Despite being an underdog going into the fight, he was able to win a decision. He next took on Raphael Natal four months later and was able to win with a head kick KO. He experienced his first professional defeat when he lost a decision to Ronny Markes in Brazil. Andrew had the biggest win of his career when he was able to defeat UFC veteran, Chris Leben, by split decision. He next took on Luke Barnatt at UFC Fight Night 30 in Manchester, England. Although he came up short, losing via second round submission, he was able to pick up the "Fight of the Night" bonus.